[Old School MTG Brawl] Building 93/94 Reanimator in a format with “Color Identity” (and a new giveaway!) 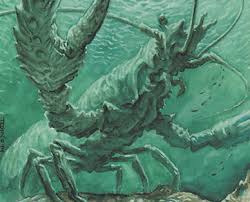 This week, instead of building a deck around a Commander, we build the Commander around the deck.  Reanimation has always been a strong Plan A.  Additionally, in a multiplayer format filled with board sweepers, a few deck slots devoted to reanimation is also a worthy Plan B.  Luckily, reanimation exists in nearly every color combination, so this strategy can be crammed into a lot of decks.  In this article, I attempt to shed some light on some of the most useful cards.  Fans of Dredge, pay attention, because this could be the Old School MTG 93/94 deck for you!

Why Halfdane?  Uhh, well I think the question is more accurately posed as: “Why Esper (B/U/W)?”  For decades, reanimator decks have freely included creatures of any color combination because there was never any need to cast then from the hand.  However, Reanimator is tricky in Commander formats because of the concept of “color identity,” a deck construction restriction which is not seen in most other formats.

“903.4. The Commander variant uses color identity to determine what cards can be in a deck with a certain commander. The color identity of a card is the color or colors of any mana symbols in that card’s mana cost or rules text”

Although Red and Green can both genuinely contribute to the reanimation gameplan, Esper prevails in terms of both quantity and quality.

At this point, you may be asking yourself: “Okay, but c’mon, reanimator needs Red.  How do you build Old School MTG 93/94 Reanimator without Wheel of Fortune, amirite?  So why not Grixis (R/B/U)?”

Grixis (R/B/U) is a great color for Reanimator, with blue and red’s discard outlets, Gwendlyn Di Corci as a Commander, Nicol Bolas as a reanimatable fattie, and Sol’kanar the Swamp King as a castable fattie.  However, to avoid building Grixis (which I am convinced is the “best” Old School Brawl combination), for like the third time on this blog, I narrowed the deck down to either Esper or Jund.  We’ve already featured Jund as the unheralded best color combination for Old School “Ponza” Land Destruction, so that left Esper.  Don’t worry, we are still going to touch on how Red can help with reanimation. 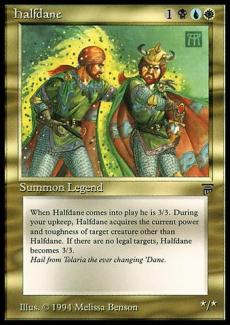 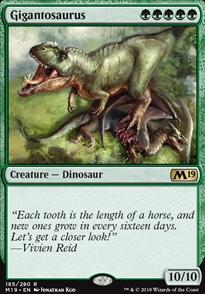 Therefore, due to the restrictive nature of the format, we are limited to merely four Commanders.  Of the four, Halfdane is the easy choice because it is only 4cmc and can copy the power/toughness of our reanimated fatties.  Who wouldn’t pay four for Colossus of Sardia, but without all of the drawbacks, rendering it a vanilla 9/9?  I know I would.  That’s essentially a Gigantosaurus. 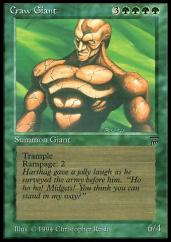 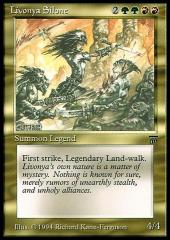 Without Green, we miss out on some of the best fatties, such as Craw Giant, Force of Nature, Gruul (G/R) fatties Jerrard of the Closed First and Livonya Silone, and Selesnyan (G/W) fatty Sir Shandlar of Eberyn.  We also miss out on toolbox cards such as Sylvan Library, Regrowth, Berserk, and Elves of Deep Shadow.  Most importantly, Reincarnation and Eureka will be sorely missed.  More information about Eureka decks can be found here. 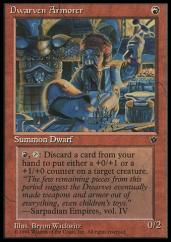 You might think that, without Red, the biggest hit to the deck is the lack of Shivan Dragon.  I’d agree that the colossal, flying terror has been winning games since 1993, but the bigger loss to the deck are the simple discard outlets like the aforementioned Wheel of Fortune, Dwarven Armorer, and Land’s Edge.  There are also a couple other, less-known fatties: Beasts of Bogardan, the Rakdos fatty Lady Orca, and… Orgg ( ͡° ͜ʖ ͡°).

And, of course, because we are using neither Red nor Green, Bartel Runeaxe will also be sorely missed. 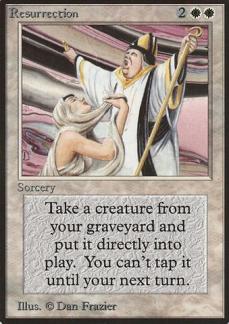 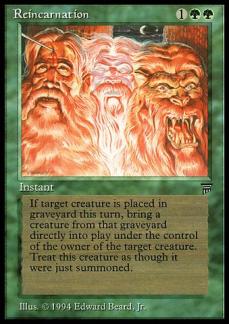 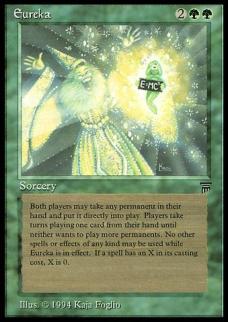 The good news is that Blue obviously has some of the best discard outlets in the format and Resurrection is more precise than Reincarnation and safer than Eureka.  White also low key has some of the biggest, fattest, fatties in all of Old School MTG 93/94.  Let’s check it out! 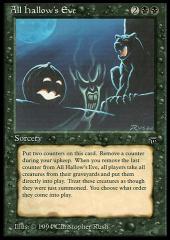 The first four cards in your deck should be these four no-brainers: Animate Dead, Soul Exchange, All Hallow’s Eve, and Hell’s Caretaker.  The Swedes discuss Reanimator here and the Hell’s Caretaker Combo deck here. 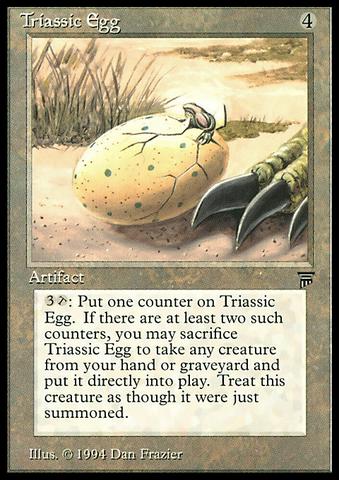 Other than the aforementioned Resurrection, White and Blue offer nothing to this part of the combo.  Surprisingly, Colorless does!  I never thought I would say this, but Triassic Egg might actually be good in Brawl because it’s the only colorless reanimation spell in 93/94 Old School.  Skull of Orm can also dig up old Animate Deads.  Neither of these cards have a color identity, so these are both mandatory inclusions in every Reanimator deck (assuming you run Black, of course).

Notably absent from the discussion regarding reanimation, Blue really shines in the discard outlet portion of this combo.  The best card in the deck may very well be Deep Spawn, a fatty whose “drawback” fills your graveyard with more fatties.  Sindbad, Mind Bomb, and Recall are also great cards.  Using Nebuchadnezzar and Amnesia on yourself, is, uh, optional. 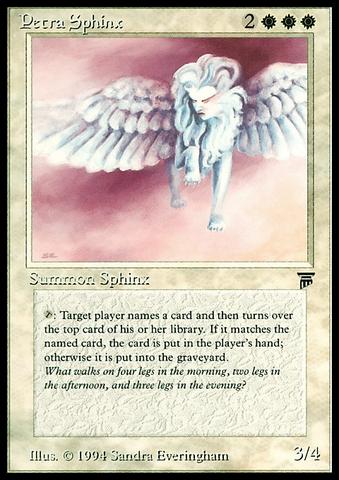 Black has some Discard/Mill outlets, but they mostly revolve around Hymn to Touraching yourself, Mind Twisting yourself, or Chains of Mephistopholes…ing yourself.  White gets a little more interesting, because you can Balance yourself and because Petra Sphinx is kind of like a worse version of Deep Spawn.  Yes, Petra Sphinx has wings.  No, it does not Fly.

We round Colorless out with the obvious Bazaar of Baghdad and Jalum Tome.  Those four seem like no-brainers, but I suppose that if you really needed a worse Jalum Tome, you could always use Jandor’s Ring.

Aside from Resurrection, White is sneaky-good in the fatty department: Akron Legionnaire, Personal Incarnation, and of course Serra Angel. 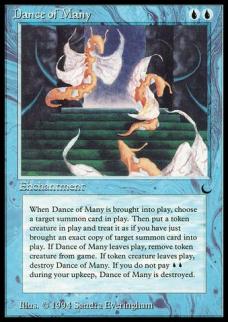 Aside from the aforementioned Deep Spawn, Blue rounds out the team with some big flyers: Mahamoti Djinn, Air Elemental, and Serendib Djinn.  Clone, Dance of Many, and Vesuvan Doppelganger, much like Halfdane, are Shapeshifters that fit the Halfdane theme.

Lord of the Pit and Sengir Vampire rule the sky.

Mishra’s War Machine is awesome.  It’s huge, it’s a discard outlet, it’s technically castable, and it has no color identity.  It is a mandatory include in every Old School MTG 93/94 Reanimator Brawl deck.  Don’t forget that it has Banding.  Other big idiots are Obsianus Golem, Juggernaut, Triskelion, Tetravus, Bronze Horse, and Colossus of Sardia.

That’s roughly thirty or so cards, more than enough to get you started on building an Old School MTG 93/94 Reanimator Brawl deck.  You now have all the information you need to pick whatever color combination you prefer, fill it up with some draw spells and some removal, and hit the ground running!

Thanks for reading and please consider joining our Discord to continue the discussion!  We also urge you to follow us on Twitter, YouTube, Instagram, and Patreon so that you don’t miss anything.  At the very least, please take a moment to subscribe to our Twitch channel with your Amazon/Twitch Prime account and/or rate us 5 stars on Facebook.  Those are two great ways to support our blog and they cost you absolutely nothing!

As a treat to our followers who read this far, we are pleased to announce another giveaway!

10 Comments on “[Old School MTG Brawl] Building 93/94 Reanimator in a format with “Color Identity” (and a new giveaway!)”