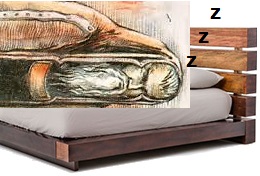 Recently, I’ve had the itch to start Spiking again and have been focused on my Budget Decks series, the NEOS Monthly Tournaments, Hartfordfestivalen, and next week’s Mobstercon.  Regrettably, it’s been over four months since my last Brawl-specific article (excluding my Knowledge Vault series).  However, this one is a doozy!  Don’t worry, it won’t put you to sleep.
WHY RASPUTIN DREAMWEAVER?

Upon selecting Rasputin as your Commander, you gain access to nearly every Blue and White card printed through 1994, and those were and still are some really powerful cards.  Notably, Karakas, Ancestral, and Braingeyser are banned in Brawl, which means a potential combo enabler and a potential kill spell are both off of the table.
So why Rasputin?  Honestly, because fellow New England Old School member Mark Gabriel wanted to build his first Brawl deck.

However, if you happen to be one of the billions of the people in the world not named Mark, then maybe it’s because you like Andi Rusu’s signature art style or because you find Rasputin quirky and interesting.  Having not been named Mark at birth, my initial reaction to selecting Rasputin as a Commander was as follows:

“Rasputin… well… he has a wall of interesting text that I’m sure you can do something with.  Having been errata’d to have “dream counters,” take note that he doesn’t die if he wakes up.  Technically, he accelerates your mana because he costs six but can create seven colorless mana.  Combine him with Farrelite Priest and you can end up with seven white mana!  He commands over one hundred decks on EDHREC, so that might be a good place to start.” 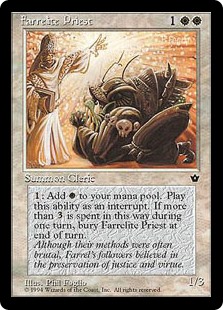 Sadly, EDHREC was not a good place to start.   Thankfully, Mark was already well-versed in the untiered, non-Brawl Rasputin Combo deck in normal Old School MTG 93/94 play, and we used Shane Semmens‘s and TappedOut user “roansteele”‘s versions of the deck as additional inspiration.
WIN CONDITIONS
So, Rasputin’s abilities basically read: “this guy slowly generates colorless mana while trying not to die.” 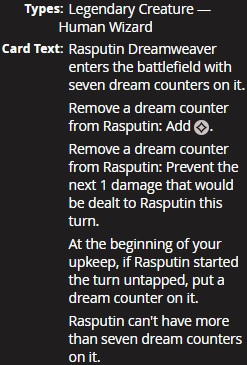 So what the Hell can we do with a bunch of Colorless mana?
1.  Power Monolith 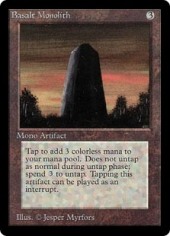 Rocket Launcher immediately comes to mind, so a toolkit of Power Artifact and Basalt Monolith make sense.  Dragon Engine is just the Rocket Launcher of the Combat Phase.

Aladdin’s Ring is pretty hilarious, and Animate Artifact makes it even funnier.  I wrote about a similar combo in an article on Transmutation.  Finally, Voodoo Doll appears to use colorless mana to generate damage in some way if you can figure out how to avoid hurting yourself.  I’ve never used it but, if it has any use at all, it’s probably useful in this deck.  Finally, Colossus of Sardia fits the theme of “costs a ton of colorless mana.”
2.  Twiddlevault 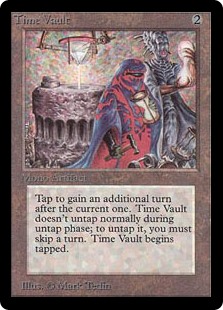 Twiddle could come in handy with the Voodoo Doll and Colossus of Sardia, so maybe the recently Unrestricted Time Vault, alongside Recall could, at the very least, make a hilarious 2/2 that sometimes provides you with an additional Time Walk.  More on Twiddlevault can be found here.
3.  Candeltide 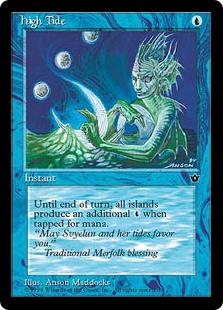 If you don’t get the Power Monolith infinite mana combo, there are still other ways to generate the forty mana required to Rocket Launcher your opponent to death.  Candelabra of Tawnos is another established deck archtype that uses Mana Flare to power out a Fireball.  Without access to Red, we can instead use Mana Flare’s single-serving cousin: High Tide. I’m a fan of the Anson Maddocks art.  No, you cannot Energy Tap a tapped Colossus of Sardia, but you can cash in all of Rasputin’s counters and then Energy Tap him for an additional six mana, providing you with a total of thirteen colorless mana!  Just note that, if Rasputin remains tapped, he won’t accrue a Dream Counter at your next upkeep.  With thirteen colorless mana, you can do all sorts of stuff like… uh… cast and activate Aladdin’s Ring, untap that Colossus of Sardia, or activate a Power Artifacted Rocket Launcher thirteen times.
Great, so now the deck is three different Mono Blue combo decks smashed together into one unified pile.

Okay, even the Johnny in me thinks three combos is enough. 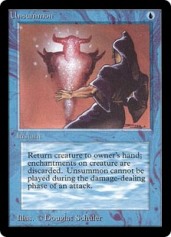 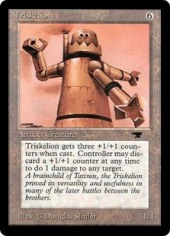 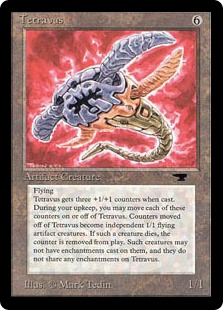 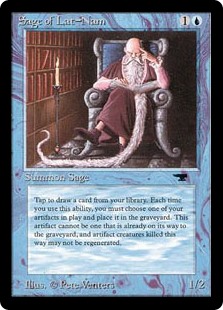 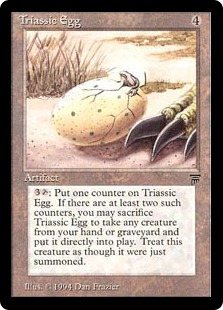 Hey, look!  White cards!  So this portion of the deck uses Tawnos’s Coffin, bounce spells, or recursion and reanimation to put counters back on Triskelion, Tetravus, and, of course, Rasputin Dreamweaver!  Sage of Lat-Nam can discard your unused artifacts, Tetravus tokens, or Triskelions with zero counters left so that you can do it all over again! 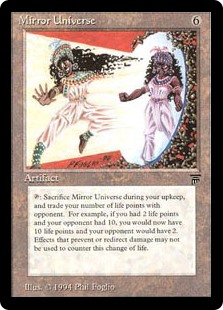 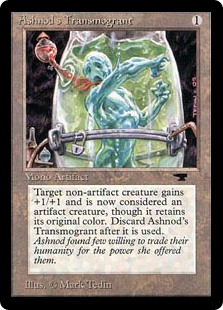 At this point, we might as well go full Tron and Robots and add singletons of the Urza’s Land Cycle (no, different arts don’t count), Mishra’s Workshop, Ashnod’s Transmogrant (the subject of a great article recently posted by Commander Axelrod Gunnarson’s Bag!), and Mirror Universe.  The transmogrant is great with Argivian Archaeologist.

In actuality, the deck is now already eclipsing forty cards with Power and Mana Rocks, so I’d probably skip the Time Vault and Candeltide combos and start with just the Power Monolith Plan A and Robots Plan B. 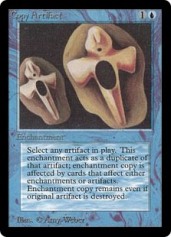 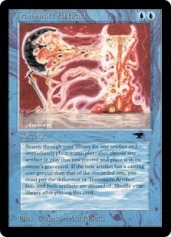 Cards that don’t directly contribute to a combo, but help you find or otherwise use them are Copy Artifact and Transmute Artifact.  Skull of Orm can help you recur old Power Artifacts and Copy Artifacts.  I’d also consider Castle, which makes Rasputin a 4/3, allowing you to spend less counters protecting him and more on abusing him. 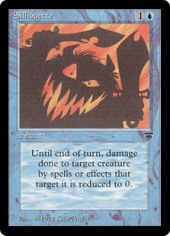 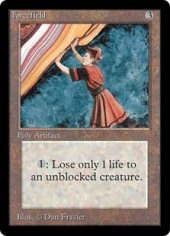 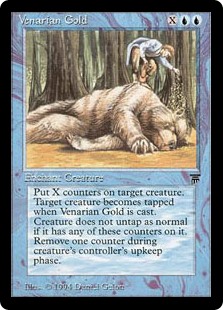 What?  Did  you think we were going to build an infinite mana deck and forget the one card that is both devastating and thematic?
C.  STAPLES
Rubinia Soulsinger and Rasputin Dreamweaver share two colors, so a lot of the Brawl staples are the same between both decks.  Just remove the Green!

I’ve been testing the Storage Lands, Icatian Store and Sand Silos.  I was pretty impressed with Bottomless Vault in my Mono Black deck. 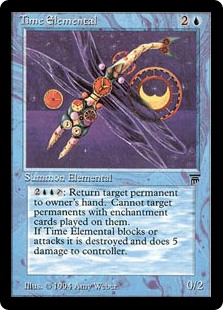 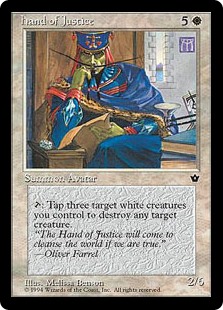 If you’re a little more creature heavy, Hand of Justice is a lot of fun. Witch Hunter is nonnegotiable.  Time Elemental is also a house in this format.
With all that said and done, at this point it’s really just seasoning to taste with busted cards that require little to no discussion:

Thanks to Erik (@mtgosnyc on Instagram) of the Sisters of the Flame, we have a wonderful new tool, MagicOS.co, which helpps us visualize the final product.  Nothing against Mana Stack, but I’d rather support a fellow player!

Of course, this is just one way to build the deck.  You could also go with a Stasis Package of Kismet, Black Vise, Winter Orb, Phantasmal Terrain, Armageddon, Land Tax, Rainbow Vale, Ankh of Mishra, Icy Manipulator, Relic Barrier, Howling Mine, Tabernacle of Pendrell Vale, Greater Realm of Preservation, Circles of Protection, and Magical Hack.  You can also build Rasputin with a Mill Package of Millstone, Mind Bomb, Amnesia, and Tormod’s Crypt.
That’s about it!  I hope you enjoyed the article.  My apologies if there are any errors or typos, this was written overnight and I am leaving for GP Providence in about ten minutes, where my Mobstercon teammate Jason Dorman has set up some free play on the event floor around 1:00 p.m.  You may remember Jason Dorman as the Assistant TO who ran the Brawl side event at Hartfordfestivalen.  Did you know that he will be hosting a Brawl side event at Gaming for Gains 8?

Please check back next week for June’s Knowledge Vault which will include one errata that will be in effect at Gaming for Gains and one suggested errata that needs further testing.
If you play Brawl or are considering it, you might enjoy my other Brawl articles:

Thanks for reading and please consider joining our Discord to continue the discussion!  We also urge you to follow us on Twitter, YouTube, Instagram, and Patreon so that you don’t miss anything.  At the very least, please take a moment to subscribe to our Twitch channel with your Amazon/Twitch Prime account and/or rate us 5 stars on Facebook.  Those are two great ways to support our blog and they cost you absolutely nothing!

If you’re having trouble finding an opponent, there are also tons of people who are always down to jam a game of 93/94 over webcam in the OLDSCHOOL 93-94 ONLINE TOURNAMENTS Facebook group!  You can also message, comment, Tweet, or whatever at the blog and I will personally play with you!