To celebrate the debut of the Atlantic 93/94 Old School MTG Restricted List and the restriction of my nemesis, Strip Mine, we’ve decided to serve up a slice of singleton land destruction!

As we have done in the past, there will be no decklist here.  We want to encourage innovation and experimentation in this budding format, not some sort of rubric or ideal decklist.

Jund Ponza is the undisputed champion of land destruction in the Old School MTG 93/94 format.  Unsurprisingly, the two colors that are the worst at land destruction are Red’s enemy colors: White and Blue. 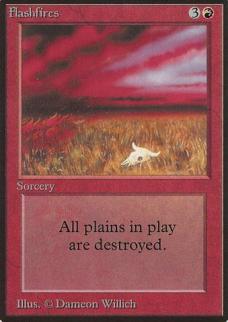 Sure, White has Armageddon, and I have been meaning to try that Blood Moon / Conversion / Flashfires combo (nothing says Old School MTG Brawl like a three card combo to destroy like two lands), but unfortunately the Legends of Legends did not include a Boros, Mardu, or Jeskai Commander.  In order to pull that combo off in Brawl, you would need to play Naya.  Thankfully, all of the Nayan Commanders are good, so it shouldn’t be too hard to adapt ErhnamGeddon over to Brawl in a future article.

Aside from the cards that make the Stasis deck and the Land Equilibrium deck work, the only “land destruction” that Blue offers is goofy stuff like changing the text on cards, Boomeranging basic lands, etc.

When Brawl was formally announced by DFB, it felt like half of the NEOS Facebook page was brewing Jund Land Destruction.  Ya’ll are dead to me.  Naturally, Xira Arien, who Commands 250 decks on EDHREC, was a popular name being thrown around.  And rightfully so.  As we mentioned in our article on Commanders, she’s tied as the cheapest Jund Commander.  Xira provides you with the quintessential Jund grindability when you are a little slow to achieve the lockout.  However, Xira seems more situated to Command a 1v1 Brawl deck, not one meant for multiplayer.  Therefore, another reasonable option emerges: Vaevictis Asmadi.  By handing the wheel over to quite possibly the ugliest Elder Dragon, you guarantee access to a finisher once you’ve achieved the lockout.  Adun Oakenshield is a great Commander, but he doesn’t fit the theme here.  We are pretty creature-light.  Finally, I firmly believe that Bartel Runeaxe is absolute gas in this format, but he does more good in your library or otherwise Commanding a B/G/r Stompy deck.

For starters, land destruction lacking a color identity, and consequently can be played in any Old School MTG brawl deck, includes the ubiquitous Chaos Orb and the aforementioned Strip Mine. 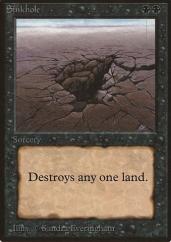 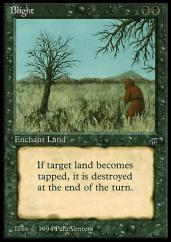 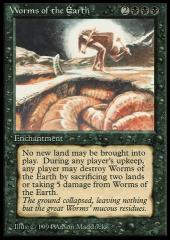 As you can see, its Black, not Red, with nearly half of all land destruction cards in the deck.  Moreover, that graph includes neither Hymn to Tourach nor Mind Twist.  Sinkhole, delayed Sinkhole (Blight), Worms of the Earth, and Demonic Hordes are the tools that Black brings to the table. 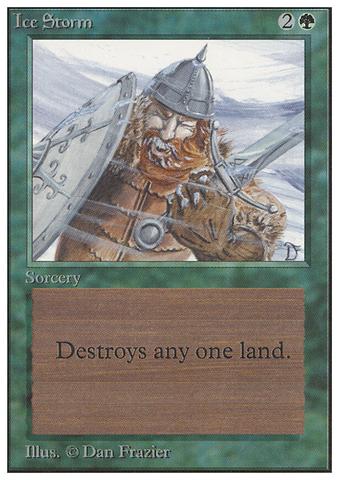 Generally, Ice Storm is an overcosted Sinkhole, which is still good enough to warrant inclusion. 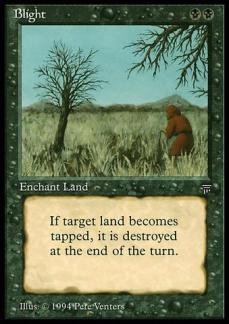 Even worse, Kudzu is an overcosted, delayed Sinkhole with a downside.  However, turn that frown upside down, because Kudzu becomes a lot more fun when you realize that, when you are ahead on lands, you can afford to play the veritable game of Land Hot Potato.  During your opponent’s upkeep, you can tap your land for Mana Burn, destroy it, and then pass the Kudzu back to your opponent before their Draw Step.  You can do the same thing during their first main phase before they go to combat.

Green also offers us the most versatile land destruction card in the format: Desert Twister.

Tsunami is a sneaky, maindeckable play here.  I mean, who doesn’t play Blue in Old School?  Oh, right.  You don’t.  Surf’s up!  Just watch out for Homarids… 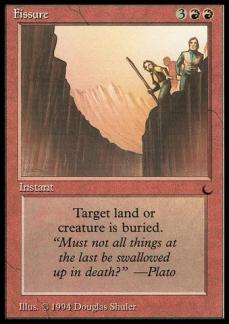 Fissure, Red’s attempt to one-up Desert Twister, is actually pretty good.  The ability to outright destroy any creature, without using damage, is atypical for Red.  Additionally, in a singleton format, Fissure helps you save precious deck space by fitting the theme of the deck without ever being a dead card.  Finally, much like Tsunami, Flashfires is at worst an overcosted Stone Rain and at best a one-sided Armageddon.

It seems appropriate, now that we’ve talked about how Red doesn’t pull its weight in this deck, to begin this section’s discussion with one of the greatest hosers ever printed, Blood Moon.  Just remember, at worst it just turns your Hammerheim back into a Mountain. 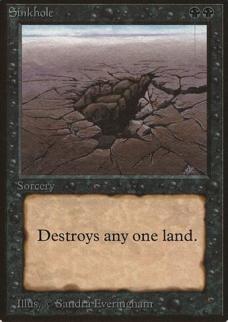 Evil Presence, as a first-turn Phantasmal Terrain, usually annoys your opponent enough for you to gain the upper hand.  Bonus: it triggers Swampwalk! 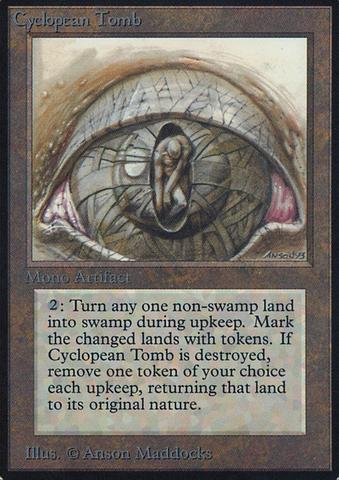 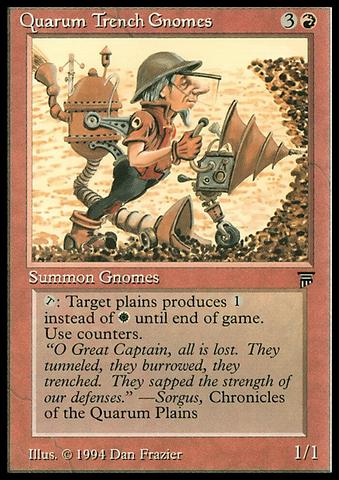 Gauntlets of Chaos is not great, but it’s flexible and acts as the Straw that broke the Camel’s back.  Your opponent suffers for like six straight turns of you destroying their shit… until you give them a land… that they can’t use.  Table flip.

Just kidding.  Thematic win conditions, other than Demonic Hordes and the five damage from Worms of the Earth, are really only… like… Black Vise and Dingus Egg?  The correct way to do it is probably Baevictis Basmati and/or some combination of midrange demons, dragons, djinns, and/or wurms.  If Land Destruction is your Plan A, then your deck is a one-trick pony so you should probably try to seal the deal before the late game rolls around.

So there you have it!  The beginnings of an Old School MTG 93/94 Brawl deck, specializing in being a dick.

Did I forget a card?  Please consider joining our Discord to discuss!  We also urge you to follow along on Facebook, Twitter, YouTube, Instagram, and Patreon so that you don’t miss anything.  At the very least, please take a moment to subscribe to our Twitch Affiliated channel for free with your Amazon/Twitch Prime account.  It’s a great way to support our blog and it costs you absolutely nothing!

Finally, as always, you should follow every Old School MTG resource that you can, such as the fine people over at New England Old School, Wak-Wak, Eternal Central, Magnus de Laval’s Blogspot, and DFB’s WordPress.

Finally finished up the Bog Skeletons from @reaperminiatures! Tons of fun painting them up to match my Maggotcrown minis as that force slowly grows. Who knows, they may feature in a future campaign!
Painted up the Thrasher Snail and some penguins from Reaper Miniatures! The schemes were way on the simple side by I had ton of fun painting them, especially the Thrasher Snail!
And here's Vatanis, Maggotcrown Warlock (or Necromancer). Lots of fun to finish a mini with way more character and detail to go along with his mooks. Now all the Maggotcrown minis are completed and I can move onto the next set!
And here's the Maggotcrown Men At Arms! I wanted to paint them up right after the Ogre Juggernaut to keep the scheme consistent between them Vatanis is up next to round out my Maggotcrown models!
It's time to Meet The Painter!
First go with using @turbodork turboshift paints! Used Twin Sons on this Thrasher Snail shell and I'm loving the effect!
Took a break from Warhammer to paint up the awesome Maggotcrown Ogre Juggernaut by @reaperminiatures! Absolute joy to paint!
The Icebrow Hunter is complete and ready to ambush the enemies of the Ogor Mawtribes! Absolutely loved painting this mini, one of my favorites in the Ogor range!
This Ogor is 🔥 Really loved working on this Firebelly and can't wait for him to light up my enemies!