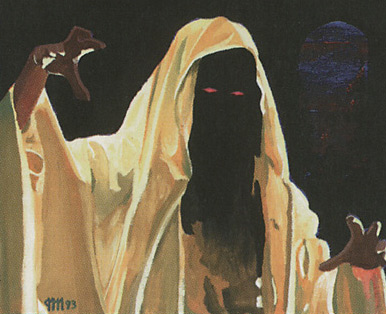 On a regular basis, usually the first or second Friday of the month, our Knowledge Vault segment attempts to (somewhat satirically) Crack into the Vault of the best Old School 93/94 cards that you (probably) aren’t playing.   This month, we unveil Banshee to prove to you that it’s more than just Farmer Joe under a bed sheet.

As many of you know, the intent of the Knowledge Vault series is to open a dialogue and encourage brewing (usually, but not always, in the Brawl or Highlander “singleton” subformats).  Expect a fun, light, Friday read to get hype for FNM.  Do not expect a deck tech (we have those elsewhere on our site) or for the article to cover every single possible known and unknown interaction the subject card has with any other card.  If I miss something: comment!  That way, we can discuss it in a public forum for the benefit of the community.

Since The Dark, not much has changed to Banshee.

You should try to spend even amounts of mana on X.  Otherwise, you get the shaft.  For example, if you spend 3, it deals 1 to any target and 2 to you.  But hey, you do you.

Also, be aware that the entire ability is countered upon resolution if the target is no longer a legal target.

The art for Banshee is a work penned by Jesper Myrfors, the original Art Director for the game who is not only partially responsible for the design of the front and back frames of every Magic card, but also responsible for Atog and Cosmic Horror and, consequently, me wetting the bed as a child.  He’s also known for gorgeous pieces like Ifh-Biff Efreet and Elves of Deep Shadow.  His professional website can be found here and his Facebook can be found here.

Banshee itself is… interesting.  This guy looks like a rejected Scooby-Doo villain.  Why do monsters always stalk around with their hands raised over their heads? Don’t their arms get tired?  Why do  Monstars always look like they’re trying to palm an invisible basketball?

On its surface, Banshee is reusable removal akin to Prodigal Sorceror (“Tim”), Orcish Artillery, Cuombajj Witches, the subjects of previous Knowledge Vault articles Thorn Thallid and Witch Hunter, and the ubiquitous Time Elemental, which ran at-large at Hartfordfestivalen.  These comparable creatures either “ping” (small amounts of damage) or bounce opposing creatures.  At the cost of mana and your life points, Banshee fills a similar role.  Moreover, Banshee can remove much larger mid-range threats and is flexible enough to be used as a late-game finisher a la Rocket Launcher. 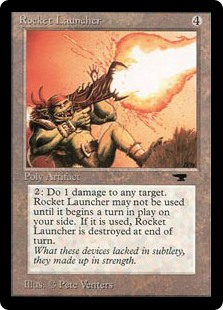 The obvious way to hit big with Banshee is to generate a ton of colorless mana via the Power Artifact & Basalt Monoloth combo.  However, don’t get your hopes up.  In Brawl, Braingeyser is banned.

In Brawl, the concept of “Color Identity” limits what Commanders are available to certain color combinations.  If we are to use this Blue enchantment alongside a Black creature, the Color Identity of our Commander needs to be UB.  Nebuchadnezzar has the lowest CMC of the UB Commanders, and his ability synergizes with a ton of colorless mana, so he seems like a natural choice.  Princess Lucrezia is another option, given that she has four toughness and produces mana. 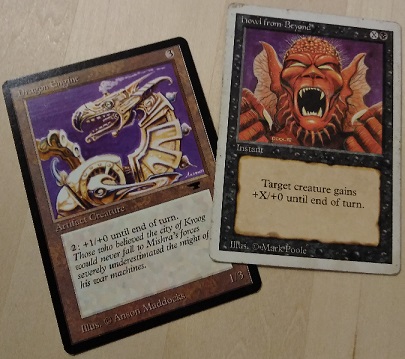 With Basalt Monolith, Power Artifact, Demonic Tutor, Apprentice Wizard, Initiates of the Ebon Hand, Drain Life, Banshee, Rocket Launcher, Dragon Engine, and Howl from Beyond, we have a pretty reasonable chance of being able to do something with infinite colorless and Black mana. 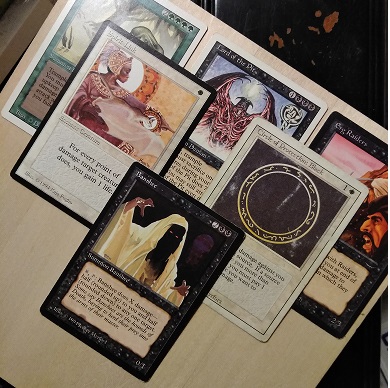 You don’t have to limit yourself to two colors, either.  If you elect to go the Power Artifact route, White is probably the best choice for third color.  White gives you access to Circle of Protection: Black and Spirit Link for the old Force of Nature trick.  This gives you some insurance if you assemble the combo with less life than your opponent(s).  White also encourages the inclusion of Rasputin Dreamweaver, Lord of the Pit, and Skull of Orm for maximum spiciness.

The easier, but more self-destructive, way to generate a ton of colorless mana is Channel.  In order to include Channel & Banshee in a deck, your only choice is to play BRG.  Thankfully, BRG gives you access to mana ramp in the form of elves, birds, Mana Flare, Gauntlets of Might, and Candelabra of Tawnos.  Moreover, all of BRG’s Commanders are good.  But how do we keep Banshee from killing us?  Ali from Cairo!  You can also forego the Channel and just play BR or BRU Burn with an optional Candelabra/Banshee combo finish.  Sol’kanar the Swamp King can help you gain some life in the meantime.

Sure, all of these combos are pretty fragile.  However, as a Black card, Banshee does have some evasion.  It’s immune to Terror, Ashes to Ashes and Hellfire and, because it doesn’t need to attack, it evades Maze of Ith, Moat, Island Sanctuary, Arboria, Angus Mackenzie, and Lady Evangela.  Blue also gives you access to Svyelunite Priest and Spectral Cloak.

Did I miss something?  Let me know!  I’d be happy to discuss the finer uses of Banshee with you in our Discord or in the comments section of social media.