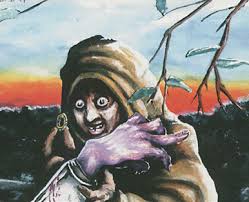 You might remember that last month’s $40 Erhnamgeddon list didn’t do so great.  However, April went much better.  After cutting the White for Red, my Erhnam & Burn ‘Em list went on to take Highest Unpowered at Hartfordfestivalen.  Hot off of that finish, I took a swing at the NEOS April Monthly with essentially the same deck.

If you’d rather not take my word for it, you can watch the match on his channel for yourself!

Game one was very close.  As usual, I played and attacked with like sixteen copies of Scavenger Folk.  What can I say?  The homeless ladies love me.  One even traded with a Juggernaut, but then I died to a Berserked, Unstable Mutationed Serendib Efreet.  In game two, I exclaimed “Atlantic!  We did it!” when I Strip Mined his Library of Alexandria.  Not to be outdone, he then Time Walked into Ancestral Recall, but I was able to ride an Erhnam into game three.  Over three short turns, Andrew systematically dismantled me by playing Sapphire, Ancestral, Jet, Emerald, Lotus, two Unstable Mutations on a Kird Ape (8/9), and a Berserk (12/7) for exactsies.  In that game, I made at least two mistakes: failing to attack with my Kird Ape on turn 2 (trivial) and failing to block on turn 3 (decisive).  Had I blocked, and regardless of whether he Berserked, I would have been above zero life and with a couple blockers while his ape rapidly succumbed to its mutations.  Overall, it was a very close series and it only made sense for my Kird Apes to lose to his home-field advantage of Kird Apes on a Kird Ape mat on a Kird Ape stream.

I was either drunk or high on life, because all I remember is that I killed a Juzam, he was mana-screwed, and that I won 2-0.

Catch 22: Pj is the nicest guy, but playing the deck that I despise most.  However, it’s also my best matchup.  This time, I wasn’t drunk, but I still don’t recall the details.  His list was less-Spikey than most and I won 2-0.

Game One was an absolute bloodbath.  We each emptied our hands of Bolts and traded blows with 1/1 flyers and Erhnams.  Then, I spun the Wheel of Fortune and we did it all over again.  I emerged victorious by skin of my teeth.  In game two, Mark drew what he deemed “a metric fuckload of cards” off of his Library of Alexandria and pummeled me.  Unfortunately for Mark, in game three, the news that the library was giving out free stuff got around to all four of my homeless ladies, who mugged him for all he’s worth.  After the match, Mark and I brewed what could either be the best or worst Brawl deck of all time, and the only hint that I’m giving you is: Venerian Gold (look it up).

Game one, his deck did The Guardian Beast Thing, but at a distinctly normal pace, which allowed me to get him down to eight life.  As the game drew to a close, I attacked with two small creatures in play.  Unsurprisingly, he blocked one with his beast’s big booty.  I bolted the beast.  In response, he blew the disk, destroying the second attacker.  In hindsight, I should have waited until after combat to Bolt the beast.  That way, he would have been at 7 instead of 8.  Then, I could have either decided to kill the beast or Bolt him down to 4.  It didn’t end up mattering either way, because he transmuted the disk into a Triskelion, shutting me off from playing any more x/1 creatures for the remainder of the game.  He then paper cut me to death while I failed to draw any burn or artifact removal.  These are the best kinds of mistakes: learning experiences that did not affect the outcome of the game.

Despite siding in the Whirling Dervishes to get past the beasts and Trikes, despite keeping a dervish-and-elf-but-no-green-lands opening hand, and despite topdecking a Pendelhaven, into a turn-two dervish, he played a turn one Ivory Tower into back-to-back Copy Artifacts.  Over the course of this excruciatingly long game, my unlikely cast of hoboes lead by a 6/6 dervish managed to deal sixty-one damage to him.  Somehow, that was an insufficient amount of damage, and I eventually fell victim to what is quite possibly the least exciting finisher in the format: Mirror Universe down to eight into four unanswered Mishra’s Factory attacks.  I may have suffered a match loss, my win-and-in, and a severe blow to my pride, but Marc did nominate me for the Marc Flore Perseverance Award, which provided some comfort in my moment of despair.

After all was said and done, I narrowly missed the Top 8.  A huge thanks to Jared for running the tournament and congratulations to Marc for winning our group.  I look forward to tuning the deck some more.  At this point, I’ve acquired the final two Taigas, the Erhnams are next on the chopping block, and I’ve also got my eyes on some CE Power.