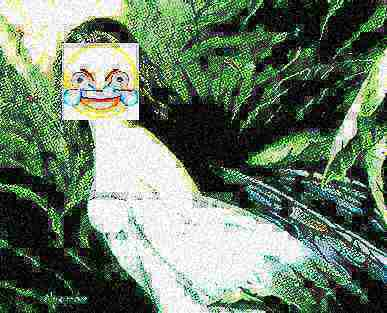 Rubinia Soulsinger, a Green/White/Blue (“Bant”) legendary creature from Legends, has over four hundred decks on EDHREC.  She was even reprinted in Commander Anthology.  With that many people using Rubinia in regular EDH, she is likely a strong candidate for a commander in Old School Brawl, as well.  So let’s take a look at the interactions, errata, and card selection that will be sure to make you the most hated person at the table!

Please note that, unlike last time (which was a decklist submission for a tournament), there will be no decklist here.  I want to encourage innovation and experimentation in this budding format, not some sort of rubric or ideal decklist. 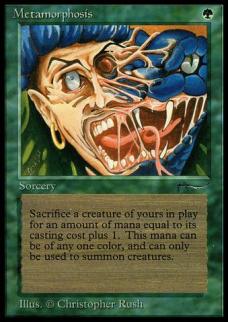 It’s not much, but using Rubinia’s “siren” effect to steal your opponents’ creatures, and then sacrifice them to Ashnod’s Altar, is hilarious.  Metamorphosis is in our colors and works here, too, but only as a one-shot deal.

At that rate, I would consider anything that kills your own creatures, such as City of Shadows, Life Chisel, and/or Safe Haven.  We talked about Life Chisel in our livestream here.

Edit: and Sword of the Ages can be a nasty mass-Fling to finish the game.

Many of the choices for Blue cards can be found in my Sol’kanar the Swamp King deck tech, because Rubinia and Solkie share a common spoke of the Color Wheel.  However, being more of a combo/control deck, you probably want to skip all the big blue flyers and fatties and instead use your Blue mana as your primary source of removal: Psionic Blast, Unsummon, Boomerang, Control Magic, Steal Artifact, Mana Drain, Force Spike, Counterspell, Flash Counter, Remove Soul, Drain Power, Energy Flux, Vodalian Mage, Prodigal Sorceror, and Twiddle.  As mentioned in the Solkie article, I wouldn’t hate Recall, Invoke Prejudice, Amnesia, Copy Artifact, Stasis, Wall of Air, or Wall of Vapor here, either.

Although everyone’s favorite marid is New England’s mascot, if you live in Charleston, don’t miss your opportunity to Clone and Vesuvan Doppleganger your Old Man to create the world’s worst neighborhood dad garage rock band: “Old Men of The Big C.”  Phantasmal Terrain warrants inclusion as a cheeky play against non-Blue opponents so that you can still use the Seasinger.

My article on Old School Mana Dorks also suggests the use of Apprentice Wizard for maximum Braingeyser (on the Watch List) pleasure.  Finally, in the “run ’em if ya got ’em” category, sprinkle in some Time Walk and Timetwister to taste.

Many players don’t know this, but Green actually has a creature with a similar “siren” effect,  Willow Satyr!  Now, it’s important to note that Willow Satyr has received errata from “legends” to only Legendary Creatures, not Legendary Lands.  Regardless, stealing your opponent’s commander and then sacrificing it is hilarious.  Unfortunately, and only because Willow Satyr’s ability explicitly says so, you must return your opponents’ cards to them if the game ends.

Other than providing another combo enabler, Green’s most notable addition to the deck is its ability to destroy flying creatures, artifacts, and enchantments: Scavenger Folk, Crumble, Tranquility, and Hurricane.  These cards merit consideration regardless of whether the deck is being played in a 1v1 or a group setting.  Green also provides a lot of neat tools: Sylvan Library, Regrowth, Channel, and Avoid Fate.  Finally, the aforementioned article on Mana Dorks, which covered Birds of Paradise and Llanowar Elves, also covered other mana accelerants, such as Gaea’s Touch and Untamed Wilds. 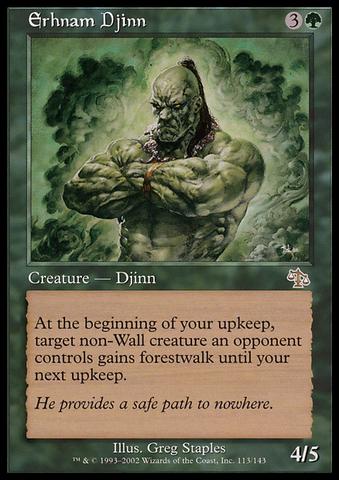 Unfortunately, Erhnam Djinn‘s original wording “in play” has received errata to “controls,” meaning you can’t give Forestwalk to your opponent’s creatures “in play” that you already stole.  The good news is, if you do a good job of keeping all of your opponent’s creatures are on your side of the battlefield, then there is nobody of which to give Forestwalk!

Unlike Willow Satyr, you may be familiar with Preacher, who “keeps on preachin'” in competitive White Weenie decks.

Regardless, it’s unlike this spoke of the color wheel as well to outright convert an opposing creature to your cause.  Usually, White’s method of removal is to either convince a creature to give up arms and go work on a farm, or brings along divine destruction a la Armageddon, Balance, and/or the Wrath of God.  You’re either a pacifist, or you’re dead.  Well, except for Moat, where you’re opponents’ non-pacifists just idly sit around alive.

Anyways, Serra Angel is a beatstick that is too hard to pass up, but don’t sleep on toolbox creatures like Veteran Bodyguard or Icatian Javelineers!

Finally, we round out the deck with some more artifact and enchantment hate: Disenchant and Dust to Dust.  Shaharazad and Land Tax are great, too, but they don’t really fit the theme and I find that you will cut them from the maindeck more often than not.

The fun, “control” artifacts that fit the theme of this deck are Icy Manipulator, Winter Orb, Arena of the Ancients, Chaos Orb, Dancing Scimitar, Aeolipile, and Nevinyrral’s Disk.  Cards that are just too good to keep out of any deck are Juggernaut and Jayemdae Tome.

An entire list of the multicolored legends from Legends can be found in my article here.  I think Ayesha Tanaka and Lord Magnus are no-brainers.

The only reason I left out Rasputin Dreamweaver and Angus Mackenzie was due to monetary cost.  If, for some reason, you have these guys lying around or you are already fiending to go “all in” on Brawl, then Hell yeah cram these dudes into the deck.  You can even sub Angus in as your commander if you find that Rubinia isn’t who you want to take to the dance.

There isn’t too much innovation in the Land department.  You get the three dual lands within your color identity: Tundra, Tropical, and Savannah.  Similarly, you can include the two unbanned legendary lands, Tolaria and Pendelhaven (Karakas is banned for obvious reasons).  Finally, Mishra’s Factory and Strip Mine are somehow still here to ruin another Old School format.

Enjoy the article?  Please consider joining our Discord to continue the discussion!

Dislike something about me, my writing style, or the article?  Please consider joining our Discord to continue the discussion!  If you didn’t enjoy the article, let us know why!  We strive to provide entertaining yet informative content and take into consideration all constructive feedback that we receive.