This is exactly what Dragoon so wonderfully allows you to do, giving you the option of making yourself richer by decimating those humans who for some reason keep building up towns next to a dragon’s lair, or by fearing them into loyalty and paying you a tribute. As a matter of fact, when you’re a dragon, the only thing that can possibly be a pain to you is another dragon.

Dragoon is also currently back on Kickstarter, which is good news because they were entirely out of stock prior AND there’s a new expansion for this game on the way! You can back it here for the next 5 days before it’s funded.

Quick Synopsis:
Dragoon is a game for 4 players where everyone is a dragon and you’re racing to be the first to 50 gold. The game is played in rounds, with each round having three phases: Populate, in which those pesky humans show up, Action, in which you and your rival dragons destroy towns, make them swear fealty, and fight each other, and Tribute, where you see just how loyal the human towns are and collect gold. 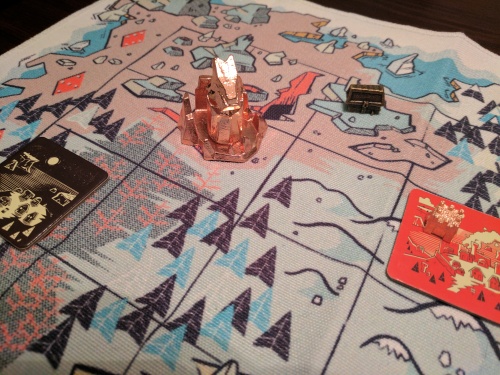 Set Up:
Setting up doesn’t get much simpler than Dragoon; the booklet shows you where to put your lair (and dragon) on the map and then you draw 3 cards. Then, on the other canvas, you place the dragon head piece that corresponds to yours on 0 gold. And you’re ready to go!

Game Play:
I’m personally a fan of the structure of game play; phases help define the flow of the game, and in this case, allow the game to progress at a nice speed rather than slow it down. After a game or two, it will take you mere seconds to get through the Populate phase and Tribute phase, with player turns being the focus for strategy- as it should be. Let’s take a run through the phases:

First, is Populate. During this phase, you roll the two 6-sided dice a number of times equal to the number of players, plus one. Whatever you roll corresponds to a square on the mat, where a town is added. If a town is already there, it becomes a city. And if it’s already a city, or you roll the location of a dragon’s lair- it goes straight to the thief who has their chest placed on the map- also rolled randomly by the dice.

Second, is Action. Here is where the meat of the game is- starting with the player with the lowest amount of gold (and rolling to break ties), each dragon takes their turn, which consists of drawing a card, 3 actions, and playing cards. Most things cost 1 action- moving one square (you can’t move diagonally), claiming a town/city, destroying it, stealing from the thief, and so on. Drawing another card costs 2 actions, or you can discard and draw for 1 action. Cards are always free to play, so they can really have sway over your plans and maximize your time, even after your third action has been taken. You can also battle the other dragons by entering their space! It’s a roll-off, with cards that can be played after combat to enhance what you rolled for a surprise victory.

Cards are what makes Dragoon dynamic- giving you extra actions, advantage in battle, “roaring” to fear surrounding towns into being loyal to you, just to name a few! I’ve found that how you play your cards, whether you stockpile or use them as you get them, can have a huge impact. For that reason, when my group plays, we pay as much attention to the gold of other dragons as we do to the size of their hand of cards.

The final phase is Tribute. This one is quick; unless you have a card specifying otherwise you roll a single 6-sided die; on a roll of a 1 you get no gold and lose one town of your choosing. A 2 is simply no gold, 3-5 gives you 1 gold per town and 3 per city, and the coveted 6 is 2 gold per town and 4 per city. Any city or town that you are standing on that you own automatically pays you the 3-5 roll regardless of what you do roll, and when it’s your only loyal group of humans, you don’t need to roll at all. Conversely, a town of yours that another dragon steps on doesn’t pay its dividends regardless of your roll either.

At the end of this when people add up their gold, if no one is at or above 50, you continue right back to the Populate phase and start the round anew. If a player has 50 or more, they win! They’re the best dragon… until next time. And if 2 or more players are at or above 50, it goes to the dragon with more, or in the case of a tie, a new round starts and all dragons are still in it!

Quality:
Based on the pictures it shouldn’t have to be said, but I will: This game is beautiful and high quality. From the feel of the cards to the cloth game board to the metal pieces, everything about this game screams that it belongs in a dragon’s hoard. This is one of the few games I am very careful about putting away, lest something happen to the wonderful cover art on the box or it’s contents.

The map itself is a wonder; the art and coloration are great to look at. One player, who always plays the Silver dragon, must start on square 5-5, since they are the ice dragon. And so we rotate the map based on where they are at the table. Whatever view of it you have, its visual appeal is great, as are the city/town cards that will eventually litter it. Making the dragon lairs have a good 3D depth to them really helps them stand out as caves, overlooking the meager humans who dare set up town that has been destroyed for the last 5 turns but we keep rolling that square.

All the totems, the dice, the thief’s chest, and score trackers- all metal, and all beautiful as well. In all, I could stare at this game for hours and just hold the pieces of it.

Final Thoughts:
As the first review on Ready to Role, I’m still getting my bearings on how these types of reviews should be formatted throughout, and how they should end. I didn’t touch upon the contents of most of the cards, the thief and their chest, or some of the other situational rules that can arise, such as ending your turn in another dragon’s lair. These are the nuances that makes the game amazing, strategic, and give it a huge replayability value. This has quickly become the go-to game for my group when we’re not playing our D&D campaign. Rivalries and frenemies arise and fall during each session, and we often play 2-3 games in a row- and even at the next session, dragons remember when they’ve been betrayed or singled out. For you to truly appreciate it, I implore you to check it out- and now is the perfect time since you can back the expansion kickstarter and get the base game and/or the expansion (which requires the base game to play)!

The expansion is adding two more characters- the Rogue and the Barbarian, both of which will play differently than the dragons and each other. It also makes the game compatible with up to 6 players, and can be played in any combination, so you don’t need 4 dragon players before using the new pesky human characters. For more information, check out their Kickstarter and be sure to follow them on twitter @playdragoon.