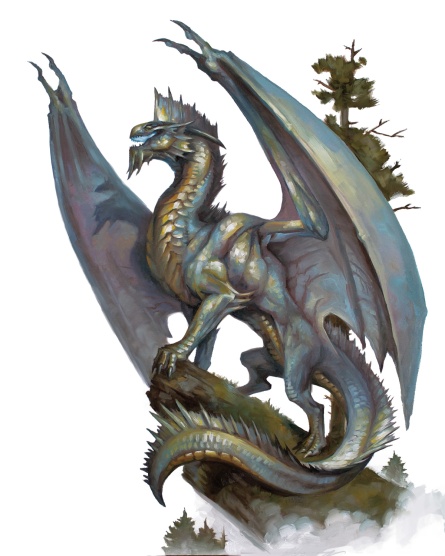 Where their chromatic kin favor evil and greed, Metallic Dragons respond with championing good and curiosity. They view themselves as powerful, but rather than using that power to dominate and rule over lesser races they instead see themselves as protectors of those weaker than them and understand that every creature big and small has its role. Each type of Metallic Dragon has its traits that differ, from their breaths and abilities to how social they are with others. One power Metallic Dragons possess that their chromatic cousins do not is the ability to shapeshift, allowing them to take up human form and socialize how they see fit with nearby societies. This is where their sociability comes in, with Gold dragons tending to be more reclusive, whereas Silver dragons may spend half their lives in humanoid form. Another notable power is their breath, which has two modes- one of destructive force like a chromatic dragon’s, and another of a more benign affect, such as breath that could put an enemy to sleep. As they are dragons though, they do accumulate wealth and treasure for their lairs, though under a much nobler mission. Rather than greed and a lust for power, they take unclaimed and lost treasures for the curiosity of it, as well as keeping a tight hold on powerful magic artifacts so that they do not fall into the wrong hands. To this end, a Metallic Dragon could be convinced to part with a specific item if they feel it would be a boon for the side of good. And, because there is always going to be a mirror between Metallics and chromatics, there is a foil to Tiamat, namely Bahamut, the Platinum Dragon. Bahamut is the king of good dragons, rarely involving himself in the lives of mortals except for his amusement (wherein he appears as an old man accompanied by canaries, themselves who are polymorphed gold dragons) or to count Tiamat’s attempts to cause destruction.

Metallic Dragons suffer the same age and mechanical progression as their Chromatic counterparts, going from Wyrmling, to Young, to Adult, and finally to Ancient, picking up the durability, offensive capabilities, and legendary capabilities described previously. Also mentioned previously is the duality of their breath weapons and their ability to change shape at will. The ability to change their shape is gained in their Adult age, and they can transform into any creature as powerful or less powerful than they are, meaning that Ancient Metallic Dragons can turn into just about anything their heart desires. For the breath weapons, each has a unique non-damaging form. Brass dragons are able to breath fire and sleeping gas, Bronze can breath lightning and repulsion energy that pushes foes away, Copper can breath both acid and a slowing gas, Gold dragons can breathe fire and a gas that saps the strength of those affected, and finally Silver dragons can breathe frigid ice breath alongside a gas that temporarily paralyzes. The duality of these breaths allows them to deal with misguided enemies in a non-fatal way, possibly giving their foes another chance to live. Alternatively, they can debilitate a true enemy long enough for the dragon to gain the upper hand and a quick victory. Additionally, Bronze and Gold dragons are both amphibious.

Assuming your group is good (or at least neutral) aligned, Metallic Dragons make for fun encounters in which their sheer power is more of a benign authority than a fearsome foe. They are more likely to halt an adventurer’s progress with a riddle or test of character than with deadly force, creating some awesome roleplay scenarios. A tried-and-true method of dragons testing the morality of a character is to use their shapeshifting powers to take the form of an elderly beggar or other harmless and helpless person and seeing how the character treats them. Does the mighty hero show compassion and help? Or are they too good to waste their time with the downtrodden? Of course, that is only one way to test. Copper Dragons for example, love pranks, riddles, and puzzles. They could be required to entertain the dragon for a while, answering the dragon’s riddles while returning riddles of their own. However you do it, do not forget that Metallic Dragons, especially the older ones, are just as fearsome as the evil dragons, and should the characters try to wrong or betray their host that the dragon won’t take it lying down. Another idea to leave you with is to come upon a battle where a Metallic Dragon needs help- be it against a chromatic dragon or an appropriate threat. The players could reverse the tide of battle into the favor of the good dragon, earning its favor and its gratitude. A Metallic Dragon is, outside of a divine being, the strongest ally an adventurer could hope for, so players should be chomping at the bit for the chance to befriend one!