Welcome to the second installment of our new weekly Facebook “Follower Build-A-List” segment in which our social media followers build a squad for me (Andrew) to fly every week.  This is an effort to make me a better player overall (by learning to win with what I’ve been given) and to also create an interactive component with our social media followers (you suggest that I fly silly shit and then you get to see the hilarious results!).

The Facebook post will go up on Tuesday every week and I will fly the list on Thursday at my FLGS (or a couple casual games over the weekend) and then I will provide you with an update before we start the process all over again.  Make sure you are following our Facebook so you can get in on the fun!

Keith Holt kicked the list off with this 32-point TIE Advanced build complete with a Wave 11 goodie which we spoiled our the fourth and final Star Wars Monday segment:

The build originally included Engine Upgrade as well, but we had so many leftover points after the third ship was chosen that I cut it to round out the other ships.

Next, Mike Warren returned for the second week in a row.  This time, Mike set us up with a fully kitted-out TIE/sf coming in at a whopping 39 points:

Rounding out the list, Matthew Courser set us up with a familiar 29-point TIE/fo build:

Although Matthew had originally suggested the standard 26-point building, I didn’t want to run the same loadout two weeks in a row.  With the leftover 3 points, I added Stealth Device to test the difference between Stealth Device and last week’s Hull Upgrade.

This week, my buddy flew Rey in the Millenium Falcon and Poe from the Heroes of the Resistance pack.  The list included one of our weaknesses: anti-target lock tech in the form of Rey’s Countermeasures and Poe’s Black One.  Rey was also sporting Veteran Instincts.  Despite my pilot skills being two 9s and an 8, I was outclassed against his 10 and 9.  He won the roll and gave me initiative. 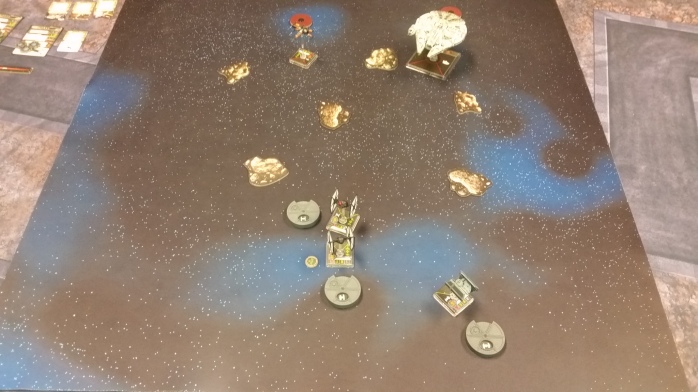 The initial approach was littered with asteroids.  Both sides of the battle chose to kick things off with an initial joust within the cramped mid-field. 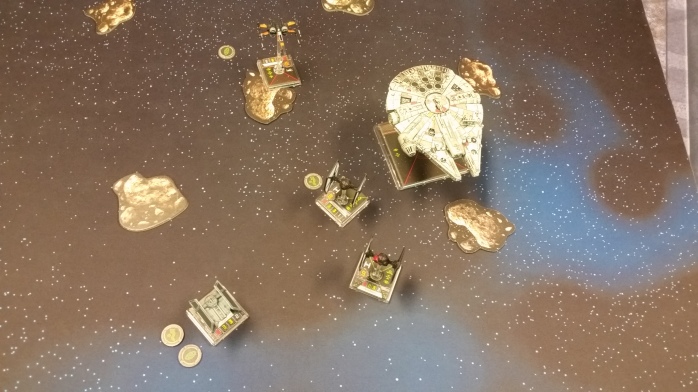 Poe, normally an ace pilot, had a momentary lapse of concentration and ended up landing on one of the many asteroids.  With Poe incapacitated, Rey showed her stuff by fitting Han Solo’s YT-1300 freighter into a tight spot.

Quickdraw, who was in Rey’s primary firing arc, took 3 hits, lost all of his shields, and whiffed on both attacks.  Vader was staring off into the endless expanse of space while Omega Leader impotently landed some glancing blows on the freighter’s shields.

Rey continued to show her 10PS by “S-Loop”ing over an asteroid and keeping Quickdraw in her primary firing arc, allowing her to add an extra Finn die and reroll her blanks with her pilot ability.  She landed enough hits to wipe Quickdraw out before he even got to shoot.  With Rey having drawn first blood, I was now looking at an uphill battle against a full Poe and a barely damaged Rey with only half of the squad that I had brought to the table.

With the fall of Quickdraw, and Omega Leader now staring off into nothingness, Vader finally got his act together and landed some hits on Rey. 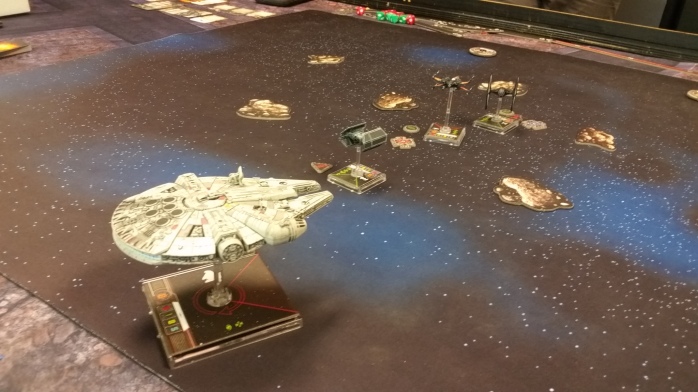 Both of the remaining imperial ships took stress to turn around, leaving them with no actions or tokens for the turn.  Meanwhile, Rey’s impeccable flying continued when she maneuvered within a quarter-inch of the board edge and Vader in her primary firing arc.  Shortly after Vader was disintegrated, Rey met the same fate.

Unsurprisingly, the bloodbath ended in a 60-100 loss

The second game went much like the first, including me taking initiative, but with the exact opposite result.  It was so fast that I didn’t even get a chance to take any pictures.  I think it ended in four rounds.

There was an initial joust between two sets of asteroids.  Rey and Poe each lost a shield or two and Omega Leader, without her target lock, was reduced to one Hull.

I was able to occupy the asteroids, forcing him to choose to either crash right into me or to peel away.  He chose to peel away and separated his squad.  Omega Leader ran for the corner of the map where she hid and flew in circles.  Without Poe ripping target locks off of Rey, and Quickdraw cooperating this time, Poe succumbed to a fully-modified quadra-tap from Quickdraw.  Meanwhile, Rey hit Vader with a brutal Direct Hit! and brought the Sith Lord down to one hull.  Vader fell, but not before handing out a Console Fire of his own with the Advanced Targeting Computer, allowing Quickdraw to finish the job.

This list was much closer to a “meta” list thing last week’s list that included a TIE Punisher.  It performed admirably and included some of the strongest ships that the Imperials currently offer.  Wave 11 has breathed some new life into the lambasted TIE Advanced.

I think one of the biggest problems with the list was Intensity on Vader without Engine Upgrade.  Keith Holt had the right idea.  Unfortunately, I tinkered with his build to move some points around and ended up with a ship that either didn’t use Intensity very often or executed unnecessary barrel rolls.  That’s my bad, Keith!  This ship would have performed much better with Engine Upgrade or without Intensity and either Cruise Missles or Adaptability.

Quickdraw was an absolute stud.  Once I remembered to use Sensor Cluster, he shined. The ability to mitigate damage, ensure that you only lose shields when you want to, and only once per turn gets you a lot of value out of this hard-hitting ship.  However, this fully-kitted out version is a bit expensive.

For our veteran readers, there isn’t anything more to say about the delightful little Omega Leader.  If you are a novice, you need to fly or fly against this ship at least once and then you will understand how powerful it is for such an inexpensive ship.  Stealth Device was fun, but it’s a little overkill.  As discussed earlier, the points would have been better spent elsewhere.

Followers, thank you for the list and be sure to tune into our Facebook on Tuesday where we start the fun all over again!

We are proud to announce a new collaboration with TopDeckTCG.com!  TopDeckTCG is your home for Star Wars Destiny strategy, content and singles! TopDeckTCG brings you everything that is Star Wars Destiny from great priced singles and promo cards to build your deck, competitive match play videos, deck tutorials and articles. Click Here For Singles!

Finally finished up the Bog Skeletons from @reaperminiatures! Tons of fun painting them up to match my Maggotcrown minis as that force slowly grows. Who knows, they may feature in a future campaign!
Painted up the Thrasher Snail and some penguins from Reaper Miniatures! The schemes were way on the simple side by I had ton of fun painting them, especially the Thrasher Snail!
And here's Vatanis, Maggotcrown Warlock (or Necromancer). Lots of fun to finish a mini with way more character and detail to go along with his mooks. Now all the Maggotcrown minis are completed and I can move onto the next set!
And here's the Maggotcrown Men At Arms! I wanted to paint them up right after the Ogre Juggernaut to keep the scheme consistent between them Vatanis is up next to round out my Maggotcrown models!
It's time to Meet The Painter!
First go with using @turbodork turboshift paints! Used Twin Sons on this Thrasher Snail shell and I'm loving the effect!
Took a break from Warhammer to paint up the awesome Maggotcrown Ogre Juggernaut by @reaperminiatures! Absolute joy to paint!
The Icebrow Hunter is complete and ready to ambush the enemies of the Ogor Mawtribes! Absolutely loved painting this mini, one of my favorites in the Ogor range!
This Ogor is 🔥 Really loved working on this Firebelly and can't wait for him to light up my enemies!