As promised, here are my initial rankings for nine Empire at War cards that have been spoiled:

It shouldn’t be a surprise that the most level-headed tactician in the galaxy is in the #1 spot.  He is the Krennic that we deserved in Spirit of Rebellion.  If Thrawn had been in Spirit of Rebellion, he would be immediately playable alongside Unkar as replacements to the characters in the “Villain Choke” deck centered around Imperial Inspection and Salvage Stand.

A strong opening play would be to start the round off with Friends in Low Places to peek at the opponent’s hand.  Then, with the information that you acquired, roll out Thrawn to rip out their best card.

Another strong play would be to roll out Unkar first with a 1/3rd chance of triggering Imperial Inspection, bounce your opponent’s best upgrade, and then roll out Thrawn while naming the cost of the upgrade that you just bounced.

Thrawn also punishes decks with consistently low resource costs.  Swing with Thrawn and blindly call out 0 or 1 and I am sure you will connect with something. 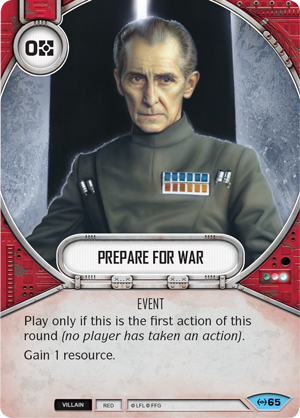 This may come as a surprise, but I think this card would also be playable had it been released in Spirit of Rebellion.  Enrage and Logistics already see tons of play.  Red already has a strong incentive to control the battlefield with cards like Dug In.  This can also set you up for first turn Z6 Riot Control Batons and Rocket Launchers on FN-2199 if you are playing an aggressive version of the deck with Jango or VaderDA.

That’s right.  We don’t even know what he does yet and I already think he’s the third best card spoiled to date.

If R2-D2 is a 0/5 and Backup Muscle is a 5/5 then Chopper is playable.  As a consolation prize to Heroes, Chopper allows a hero player to roll that same one damage 1/3rd of the time.  Unfortunately, as this requires two activations to roll and resolve, Chopper is likely only playable in a slower deck and you can just leave his die out there and discard to reroll it with all your other dice.  He’s also a cheap unmodified melee side for everyone’s favorite action-cheating heroine who loves to pair with yellow.

Even if his special is, like some have theorized, a mutually detrimental effect he will be playable.

Oh yeah, I forgot they spoiled this one.

Sabine is in a weird place right now.  Her cost, hp, and sides are similar to IG-88 and Jyn. Unfortunately, neither of those characters see much play in the current competitive meta.

However, the way her ability is worded, we can safely assume that we will get at least one “Thermal…” in Empire at War.  If we do, she instantly becomes a top contender for the centerpiece to an annoying four-dice-paired-with-Ezra-never-ending-Second-Chance–Thermal-Detonator jamboree.

She also has two 3 sides for Planned Explosion.

Mace is probably the most surprising spoiler so far considering he wasn’t in Rebels. Luke has always made a small splash since originally being paired with Ackbar for Leadership or more recently with Rey.

His cost is holding him back.  You can’t fit a helper character with him like you can with Luke.  I think most of us would agree that if he didn’t have that coup de grâce ability in exchange for being priced just a teeny bit cheaper that he would be much more playable. 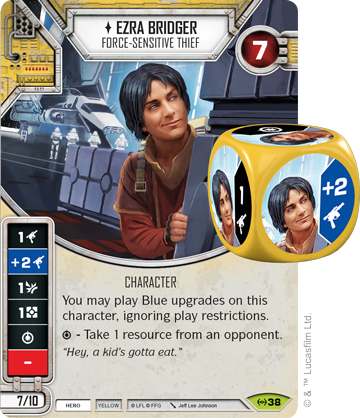 Initially, Ezra created a lot of hype by being the first 7 cost Hero.  AHH!  FIVE DICE TEAM!!  After that initial hype passes, you’ll notice that his passive ability is essentially useless (do you plan on putting 3, 4 cost blue upgrades on him?  I sure as Hell don’t).  He’s an annoying support character with die sides slightly worse than Bala-Tik.  And the other 3 dice that you can pair him up with suck just as much. 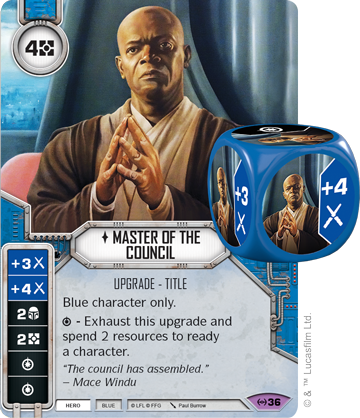 #7 Master of the Council

I’m kinda stumped here.  It’s got no blanks, insane sides, and a powerful ability.  On the other hand, it’s super expensive and costs even more to use.  I like to think of it as Hero Blue’s Crime Lord.  I suppose you can cheat it into play with Padawan, Destiny, or *barf* Premonitions.

I wonder if “Upgrade – Title” will have any significance… 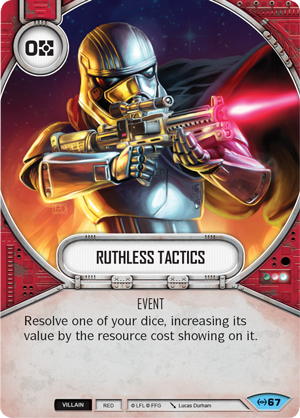 Of all the cards spoiled, I am most intrigued by this one.  It’s fucking terrible right now. We already have an unplayable piece of crap called Natural Talent.  If they release some sort of 5dmg:2resource side then this card will be nasty.

Although the unexpected spoilers created a lot of hype, I am hoping that we get some better cards.  I’m especially concerned with how many legendaries have been spoiled. Anyways, I can’t wait to look back on these predictions and see how wrong I was.  Do you share the same opinions?  Do you wholeheartedly disagree?  COME AT ME.

We have partnered up with FlipSide Gaming! Enter the coupon code READYTOROLE at checkout for 10% off!