I decided a few weeks ago to take the plunge and preorder the new Warhammer 40k 8th Edition Box Set. It was a bit of a strange thing to do on my part, because 1) it was driven by FOMO, which is something I almost never succumb to, and 2) it’s been over a decade since I last played a wargame, that being Warhammer Fantasy from before the new Age of Sigmar variant (High Elves/Ogre Kingdoms for life).

But regardless I preordered from my FLGS, and on Saturday, release day, I embarked with a friend who is interested as well to pick up my copy, build some minis, watch and play some games, and make some friends.

I find it important to tell you this so you know where I’m coming from when I form my opinions, since what I think may vary from what other, more experienced Warhammer players think. This is more of a “what do I think about this new thing” than a “what do I think of this new edition.” 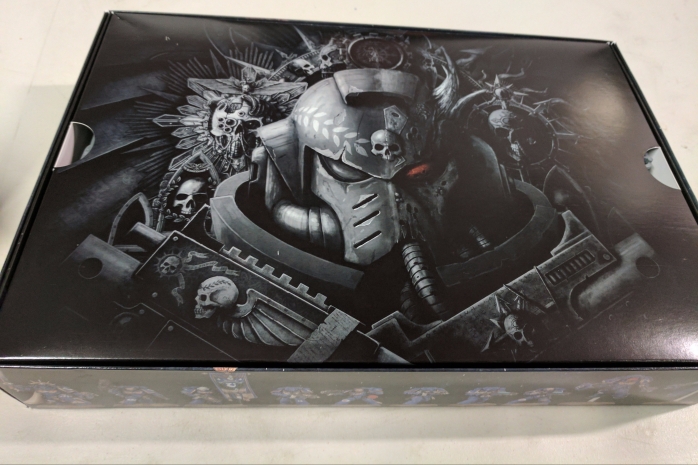 I spent a total of 5 1/2 hours at my FLGS with my friend. During that time we ate some burgers and hotdogs (provided by the FLGS!), bought, opened, and read through some of the materials, watched some other new players being taught by more experienced guys who already read the new rules, and spend about 4 hours building all of the minis. FOUR. HOURS. 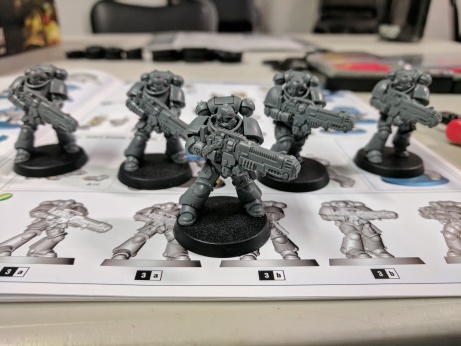 I’ve been spoiled by Reaper Miniatures and their usually 1-2 piece minis and forgot the joys of carefully cutting pieces out of sprues, carefully gluing, trying not to glue your fingers together, and holding them in place to dry. Seriously, my friend and I assembly lined it and it took us that long. I’m not sure if we’re just slow as molasses or if that is normal time, but when we finished, we carefully packed up and went home without playing ourselves, as I had a headache and he had to get home.

Even still, I had a great time meeting people who I will likely be returning to play against and getting a better feel for the game as a whole. 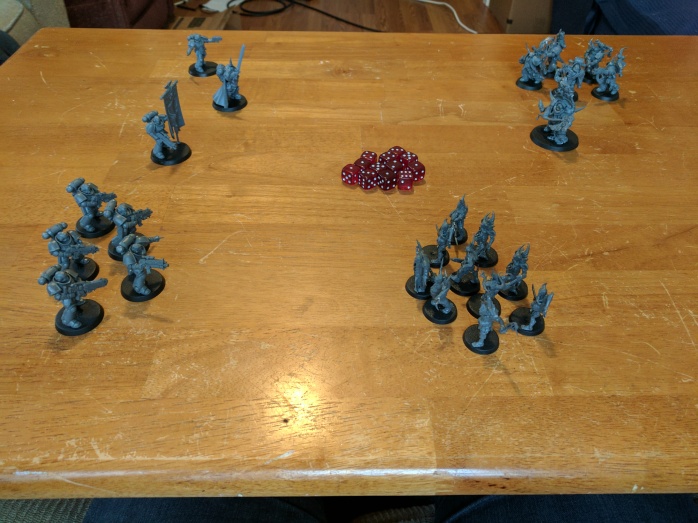 I also wasn’t about to go a whole day without playing, even if I had to skirmish against myself! Rather than use the Power Rankings that would have made choosing units for each side, I opted to calculate the points since I’m a fan of matched play, and I am nostalgic for spending way too much time deciding what magic items why High Elf Commander has. I ended up with 400 points on either side. These were the armies (seen above):

Nothing fancy, and I had them equipped per how they were described, as I’ve stupidly forgone getting the indexes (I plan on picking them up this week when I return to the FLGS). It was a hard fought battle, mostly because I kept rereading rules as I went after messing them up. For example, I did not use the Lord of Contagion’s ability where his allies within 7″ of him have a chance to do 1 mortal wound to enemies within 1″ of them at the start of every turn. This happened on both sides, and at the end of it all, the Lord of Contagion stood tall and alone after I generously rolled for the aforementioned mortal wounds at the end of the turn. 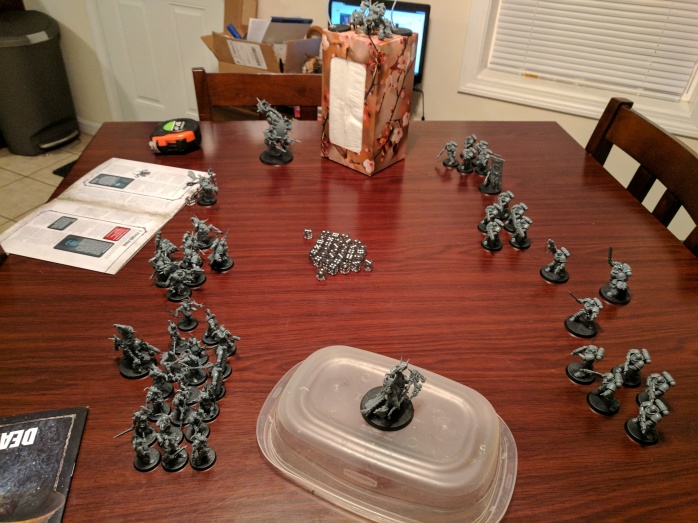 Later on at the kitchen table, a much larger battleground, I pit both entire armies against one another as they fought to control tupperware and a box of tissues. I still messed up rules but as I played I got a much better handle on how the game works and how different things interact. I also saw the different strategies of both army, with the Death Guard being superior in melee so long as they didn’t get too shredded during their approach. I’m sure I still have a lot to learn but after this game I was feeling more confident on the rules. Space Marines won by a decent margin, by the way. 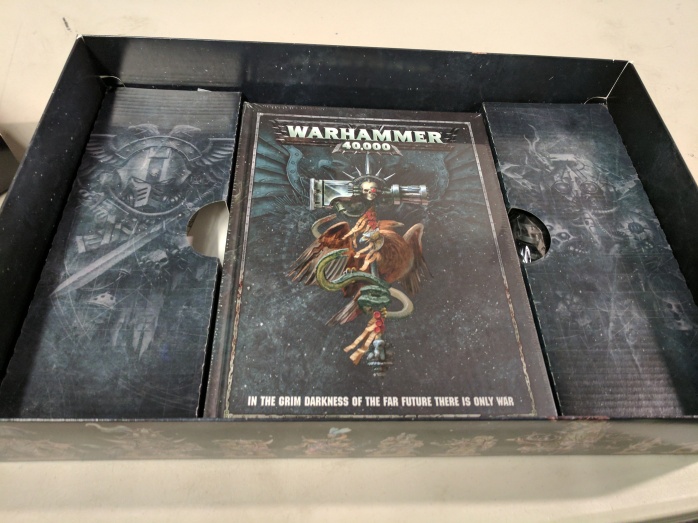 I went to sleep without having cracked open the big rule book too much, relying heavily on the Core Rules fold-out included. When Sunday rolled around I dug into it, and despite glossing over a lot on my first perusal I felt a surge of wanting to play more. I convinced a friend to come over and give it a shot, and while he’s not looking to put down money on 40k, he enjoyed it just the same after I barely beat him (and once more, a single Lord of Contagion stood victorious). I got more rules right, found more I had missed or had gotten wrong, and continued on to understanding this great game.

I’m not sure which of these two armies I’ll play, but I’m leaning toward Space Marines. This is  reinforced by the fact that I found two unopened Rhinos on eBay for slightly more than the price of one and won the auction. I also might have some older Tau models in my parents’ attic that I’ll go see if I can dig out- unless they’ve been thrown out. Only time will tell where I’ll settle, but for now I will keep on playing and having fun with it.

And we’re still in the midst of our Dice Giveaway! Follow us on Facebook, Twitter, and YouTube to enter (and be sure to like/retweet the appropriate posts). We’ve hit all goals, so all four sets of dice are up for grabs!

And lastly, we’d like to remind you to check out FlipSide Gaming and use coupon code READYTOROLE for 10% off your order.