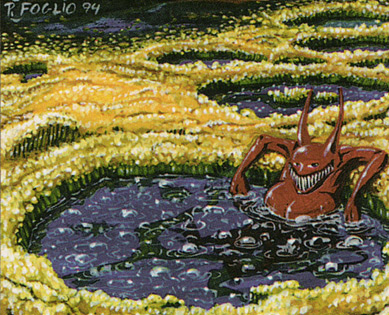 Although the cards themselves are not very colorful, our final installment highlighting some of the best Premodern cards ever printed is perhaps the most exciting of them all!  If you play or are interested in playing Premodern, you likely either played between ’95-’03 and strive to relive your favorite era of Magic or you are entirely new to the format and may not even know what some of these cards even do.  Regardless, let’s take one final look at the cards of Magic: the Gathering’s Golden Age:

There are a whole buttload of banned Artifacts (and lands)!  Obviously, the ante cards are banned: Amulet of Quoz, Bronze Tablet, and Jeweled Bird.  Perhaps more obviously are some of the most busted artifacts of all time: Mana Vault, Grim Monolith, and Memory Jar (which was banned in Type II before it was even printed).  Finally, Strip Mine and Tolarian Academy are also banned.  You’ll also note that, although not “banned,” the ABUR Dual Lands are not Premodern Legal like they were back during the days of Extended.  This is a major identifier of Premodern play. 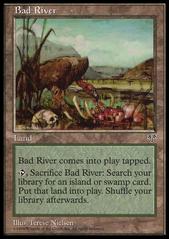 There were so, so many cycles of lands and artifacts over the years, but Fetches definitely seem like the place to start.  The colloquially known “Fetches” were a cycle of allied nonbasic lands that, for one life, could “fetch” a basic land of one of two allied colors from your deck.  Fetches also shuffled your deck, sometimes increasing your odds of winning by shuffling away less-desirable cards a la Brainstorm.  Don’t confuse these “fetches” with the Mirage Block imposters: Bad River, Grasslands, Mountain Valley, Rocky Tar Pit, and Flood Plain.

2.  …Pretty much anything that produces mana of every color. 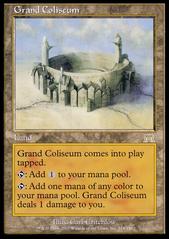 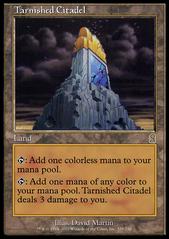 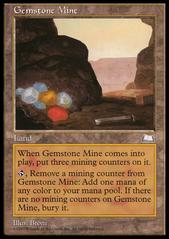 Onslaught also gives us an alternative to Fifth Edition’s City of Brass: Grand Coliseum.  Similarly, Tarnished Citadel and Gemstone Mine are worthy of decklists.

Then, once you have one of these in play, your Reflecting Pool is really providing some value!

The Allied Painlands, Adarkar Wastes, Brushland, Underground River, Karplusan Forest, and Sulfurous Springs, were a cycle of lands originally printed in Ice Age and reprinted in Tempest.  They produce either colorless mana (at no cost) or one mana of a choice between two colors at the cost of one damage to you.  The Enemy Painlands, Llanowar Wastes, Shivan Reef, Battlefield Forge, Caves of Koilos, and Yavimaya Coast weren’t printed until Apocalypse.  All ten are Premodern legal and come highly recommended as mana fixing in some two and most three-or-more-colored decks. 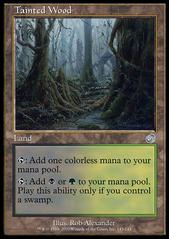 If you are playing Black, and playing some significant amount of Swamps, then you should definitely be aware of the mana fixing provided by Torment‘s “Tainted” land cycle Tainted Isle, Tainted Wood, Tainted Peak, and Tainted Field, and the ramp provided by Cabal Coffers. 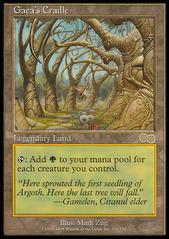 Although Tolarian Academy is banned, Serra’s Sanctum, Gaea’s Cradle, and sometimes even Shivan Gorge see play.  This time, Black gets the dud in the cycle: Phyrexian Tower.

We return to the Urza’s Block!  Control decks love to utilize these lands as win conditions, especially by way of a Faerie Conclave or even a Forbidding Watchtower protected by Standstill.  They are free, evasive creatures at the expense of coming into play tapped, which a “Draw-Go” style deck can play around.  The Ten Land Stompy deck also makes good use of Treetop Village for similar reasons.  The other two in the cycle, Ghitu Encampment, and Spawning Pool, don’t see a whole lot of play.

Although not a part of this cycle, Stalking Stones is also a “Manland.”

Edit: Big thanks to Georg for reminding me that Mishra’s Factory is the thorn in my side. 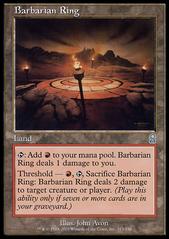 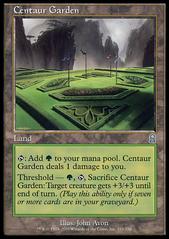 When there are seven cards in your graveyard, these lands resemble the Hour of Devastation “Desert” cycle of lands that matter.  Barbarian Ring, Centaur Garden, and Cephalid Coliseum all have their uses.  Cabal Pit, maybe.  Nomad Stadium, not so much. 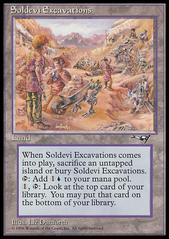 Of this cycle, only really Kjeldoran Outpost sees play, as a win condition in Counterpost.  I think Soldevi Excavations also warrants some attention, as it is essentially Premodern’s Search for Azcanta.

9.  Lands that produce more than one mana. 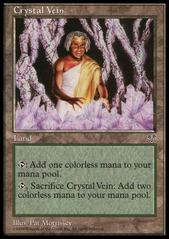 Ancient Tomb, City of Traitors, and Crystal Vein all produce more than one mana at the expense of a horrific drawback.  This can accelerate you into powerful artifacts or even colored spells, but those spells better be worth it because it may give a major advantage to your opponent to use one of these lands. 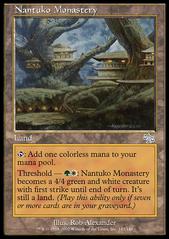 Wasteland and Rishadan Port are no-brainers, but the fringe-playable Manland Nantuko Monastery and Riftstone Portal both have their places in a G/W Threshold deck arising from the Odyssey Block.

Player Damage (“straight to the dome”):

Since the very beginning, Black Vise and The Rack were used to slowly chew away at an opponent and to push damage past Circle of Protections or numerous blockers.  Ankh of Mishra was less popular, but could be just as effective in faster decks. 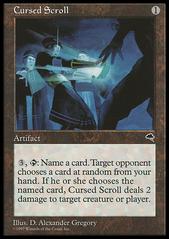 The years passed and the usage of artifacts waxed and waned until the debut of Cursed Scroll.  Scalding Tongs tried its little heart out, but ultimately Cursed Scroll became the quintessential damage-dealing Artifact from the Tempest Block. 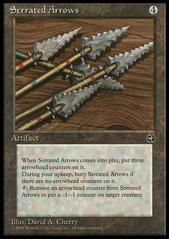 It wasn’t until the printing of Serrated Arrows that Artifacts became the best source of colorless removal.  Several years later, Masticore was used as a boilerplate finisher due to its lack of a color identity, strong statline, and similarity to Serrated Arrows.

Finally, Powder Keg can be splashed into any deck as a cheap way to keep Sligh at bay.

Similarly, original artifacts such as Winter Orb and Meekstone remain some of the most powerful cards in this category, too.  Over the years, there have been numerous spins on “prison” mechanics, such as tapping, preventing untapping, discarding, exiling, countering, or increasing the cost of your opponent’s cards.

Both Null Rod and Tormod’s Crypt can shut down entire deck archtypes for minimal mana investment. 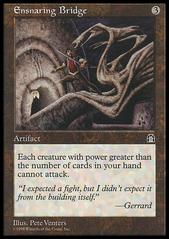 Once again, the Tempest Block gave us some nasty lockouts such as Ensnaring Bridge, Null Brooch, and Static Orb. 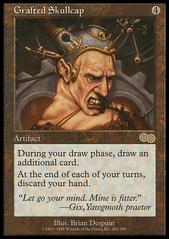 Every competitive-level player has seen the damage that mana acceleration can cause.  That’s why cards like Lion’s Eye Diamond, Lotus Petal, and Mox Diamond shouldn’t be a surprise.  However, Sapphire Medallion make this list due to the amount of work it puts in helping Trix cantrip through its deck to its combo finisher. 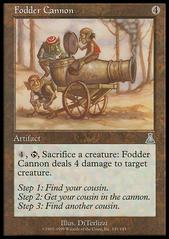 The Flavor Text Awards this time around go to Wheel of Torture and Fodder Cannon.

If you enjoyed the article, but think I forgot one of your favorite cards, consider joining our Discord to further the discussion!  We also urge you to follow along on Facebook, Twitter, YouTube, Instagram, and Patreon so that you don’t miss anything.  At the very least, please take a moment to subscribe to our Twitch Affiliated channel for free with your Amazon/Twitch Prime account.  It’s a great way to support our blog without costing you anything!  If you didn’t enjoy the article, let us know why!  We strive to provide entertaining yet informative content and take into consideration all constructive feedback that we receive.