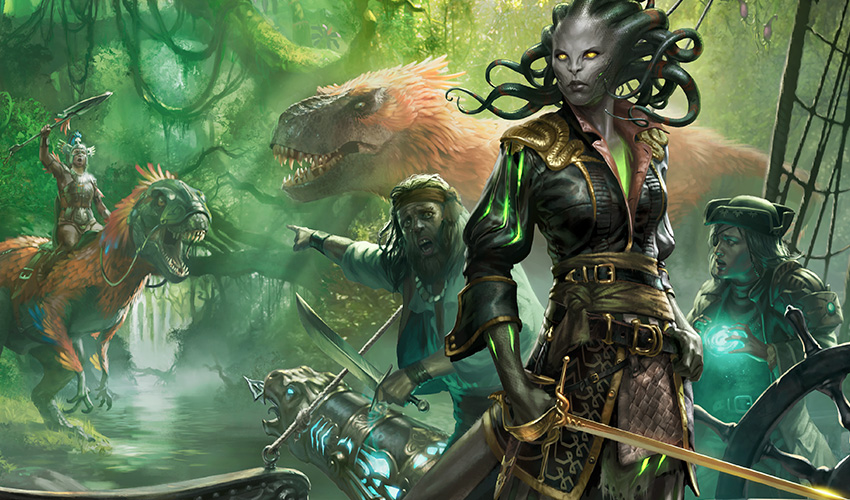 As many of you know, today is the release date for the new Magic expansion and the start of a new block: Ixalan!  Last week, I wrote about why Ixalan is the perfect time for former Magic players to return.  It turns out that I was right!  I managed to go undefeated at last weekend’s prerelease and had a ton of fun doing it.

After an inner struggle about how I’m too old to be doing midnight prereleases anymore, how I had a dentist appointment the next morning, and struggling to find somebody to accompany me, my brother agreed to check out the new set.  I probably would have went alone, but it’s always more fun with friends and family!  Plus, I had been reading articles and watching Limited Resources all week.  I was excited to put some of this knowledge to use and see if I still had what it takes to play Magic.

We met at our FLGS at about 11:30 p.m., just as the Friday Night Magic (“FNM”) Standard and Modern tournaments were coming to a close.  In total, 51 people registered for the prerelease.  Considering how long I had been away from Magic, that was a decently-sized crowd!  For example, our X-Wing Store Championship only pulled about 30 people or so.

We got handed our prerelease packs and found a corner of the store to furiously crack open six booster packs.  Upon opening the box, I immediately noticed that my randomized and stamped prerelease foil was a dud (Tocatli Honor Guard).  Oh well.  Maybe I’ll crack a couple big rares.  Nope.  No such luck.  I was excited to pull some interesting cards for my constructed Pirates deck, such as Vance’s Blasting Cannons, Captain Lannery Storm, and Fell Flagship, but the other pirates in my pool were weak and I had almost no black cards at all.  The disjointed pirates and overall lack of merfolk and vampires left me with only one choice.

At the prerelease, I really didn’t want to be that guy, but my hand was forced.  If I wanted to have any shot at winning this thing, I was going to have to channel my inner “Timmy” and play some big, bad, dinosaurs. 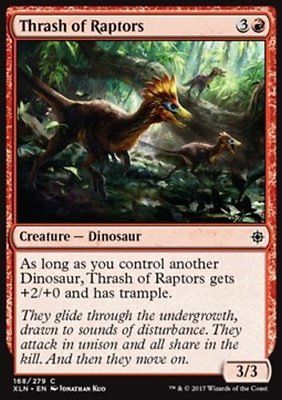 I ended up with three copies of Thrash of Raptors.  This was a card that I was very high on going into the prerelease and I was not at all unhappy to crack three.  My plan was to use low-curve dinos to get some early damage/blocks in so that I could last until turn 4.  I opened enough cheap red and green dinosaurs/blockers, and some white removal, to splash white and make R/g/w.

In addition to the cheap dinosaurs, I also opened two Atzocan Archers.  They were great at blocking flyers and killing off my opponent’s blockers so that I could get in early damage and prevent them from triggering their own Thrash of Raptors against me.

The Nest Robbers and Raptor Companions also did a great job of satisfying the condition on my two copies of Pterodon Knights.  The combination of a 5/3 trample and 3/3 flyer proved to be more than enough to finish off most of my opponents within 10-15 minutes.

I also splashed white for two copies of Pious Interdiction.  I did not open any red removal, but I was able to crack two copies of Pounce as well.  That left me with sufficient removal to deal with any of my opponents’ larger threats.

These cards were the major players, and although I don’t have a photo or list of my sealed pool or decklist, I think you get the point.  Let’s see how they did over four rounds!

Round One vs. Naya Dinosaurs:

Round one (and two, and three) was a mirror match.  It seemed like everyone had the same idea.  Unfortunately, there isn’t much to talk about here.  My opponent played very well despite a lack of mana and blockers.

Round Two vs. Naya Dinosaurs:

Yup.  We were pretty disappointed to get matched up against eachother this early in the tournament.  Both games were really close and at one point my brother dropped his bomb: a Gishath, Sun’s Avatar!  However, I was able to take the hit and fly over for the win.

Our store pays out product at an even record or better, so I was already looking at taking home some packs to crack.  Hopefully, my brother could score a win over the next two rounds so that he would also get some packs.

Round Three vs. Naya Dinosaurs:

Round three was tough.  Not only was it another mirror match, but we alternated games won via mana screw.

Round Four vs. U/B Pirates:

Before the last round began, my opponent offered to split.  With virtually 0 mana issues all night despite running 3 colors and no mana fixers, I knew that my luck was going to run out eventually.  I also had no interest in busting somebody’s balls at 5 a.m. over one extra pack.

My first tournament Magic tournament in years and I ended up undefeated!  3-0-1 landed me at 6th out of 51 and paid out seven packs.  I could have saved the packs to draft, but the smell of fresh cardboard succeeded in tempting me to open all seven packs, and I wasn’t at all unhappy about my pulls.

Either way, you should also check out the Facebook post below for details on our latest giveaway! This time, we’re giving away a free unpainted copy of Reaper Miniature’s Elanter, the Lost Prince!