While the X-Wing community was still reeling from Assault. Gunboat. Hyyyyype (skip to 1:00:46), FFG was cleverly plotting the release of a ship that we have only known about for less than two months.

Last Friday, at 4:45 p.m. EST, just as I was about to give up hope that we were not getting any sort of X-Wing news whatsoever, Fantasy Flight Games dropped this bombshell:

Before we can appreciate what the new TIE Silencer brings to the game, we must first understand the very basics of “arc-dodging.”  We are a beginner-friendly blog, so veteran players please feel free to skip this lesson and scroll down to the image of the TIE Silencer for the preview.  Many in the X-Wing the Miniatures Game (“X-Wing TMG”) community are fed up with the evolution of the game and jokingly refer to X-Wing as “Turret-Wing” or “Bomb-Wing” as a result of the current meta’s lack of dogfighting.

tl;dr:  An “arc-dodger” is an X-Wing slang term for a fragile ship, with a high pilot skill (“PS”), and excellent maneuverability.

Fragility is not really a necessity to be classified as an “arc-dodger,” but the affordable arc-dodgers tend to have very little total health.  Who needs health when you (hopefully) aren’t being shot at?  That’s just wasted points!  And more points means more arc-dodgers in your list!

A high pilot skill increase the chance of “PS Kill” on an enemy ship before it has a chance to activate during the Combat Phase of the game round.  Although maneuver dials are set at the same time, they are revealed in ascending order of PS.  A high PS ship gets to go last, allowing you to see where the enemy has moved before your ship acts.  A well-timed Barrel Roll or Boost after your maneuver can put you in the perfect position to take a shot without the fear of return fire.  Reacting last, shooting first, and taking less return fire in the process are the paths to victory.

Excellent maneuvereability affords you the best chance to put an enemy ship in your arc while being outside of the opposing ship’s arc and repositioning actions (such as Boost and Barrel Roll).  An arc-dodger’s maneuver dial is very important.  It’s very difficult to properly arc-dodge if you are restricted in your maneuver choices.  High speed, low difficulty maneuvers (lots of greens and very few reds), and “hard” (90 degree) bearing turns are a recipe for success.  Unfortunately, we only know one thing about the Silencer’s maneuver dial: it has a green hard turn at a speed of 2.  This is hopefully very good news.  The current dials that feature a green 2 hard are very good dials (as discussed below).

The classic example of an arc-dodger is Soontir Fel in his TIE Interceptor.  Soontir Fel comes with PS9, Boost, and Barrel Roll.  The Empire isn’t the only faction with arc-dodgers.  Fenn Rau in the Scum Protectorate Starfighter, Poe in the Rebel T-70 X-Wing, or Corran Horn in the Rebel E-Wing fill the same role: a hard-hitting fly that is tough to swat. 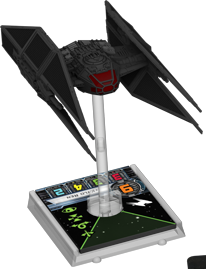 The model itself is quite possibly the coolest looking model in the game right now.  It looks like a giant, pissed-off bat.  However, the price of the expansion pack, $30, has rubbed a few people the wrong way.  I expect that collectors of Star Wars toys will easily shrug off this price for a pre-painted miniature of this size and detail, but a good portion of the community are wondering why a small-base ship costs $10-15 more than other small-base ships.  Some have speculated that it’s merely the size of the model.  Some have speculated that the amount or the quality of the upgrade cards that it comes with have something to do with it (Autothrusters are currently only available in the Starviper Expansion pack).  And here and here there is speculation that the size of the box was necessary to include new maneuver templates for 4 speed bank maneuvers or new debris clouds.  That would certainly be a game-changer!

The initial announcement article didn’t give us much to work with.  So until we get the full preview article, I am going to make some assumptions based on the one fact we do know about the TIE Silencer’s maneuverability: it has a green hard 2 turn. A quick scan of the maneuver dials currently in the game revealed only five other green hard 2s, and I think it is safe to say that the TIE Silencer will not be getting anything close to the Jumpmaster’s dial.  That leaves us with four dials:

As you can see, the four dials are very similar to eachother.  The TIE Interceptor and A-Wing‘s dials are outdated because they were released before the Protectorate‘s Tallon Roll (hard turn, then rotate 90 degrees) and the TIE/fo‘s Segnor’s Loop (soft turn, then rotate 180 degrees) maneuvers.  I think we can expect something close to the TIE/fo or Protectorate’s dial, which is pretty darn good.

COMPARISON TO OTHER ARC-DODGERS AND A THEORETICAL LOADOUT

I’m thinking of pairing Kylo up with something like this:

The TIE Silencer cannot take an Evade action. That’s not a big deal.  Bombs are unevadeable anyways.  You roll the red dice, see if they hit, and then take damage.  You do not roll green dice or use Evade tokens.  Who needs the Evade action anyways?  That would just be wasted points!  Spend those points on a total of six combined health so that you can laugh off bomb damage (assuming you don’t just fly face-first into a set of Cluster Mines).  Three green dice are customary of TIE-class ships.  It’s nothing spectacular, but with good positioning, you should be almost guaranteed to show 3 Evade results between probability, calling for a result from Emporer Palpatine, and Autothrusters. 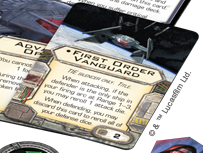 This upgrade gives you tremendous flexibility.  Free rerolls on offense are always good. With Kylo, you will want to take Focus, not Target Lock actions, because the title lets you reroll a die.  The rules state that you can’t reroll the same die twice in one shot.  It’s like a miniature Predator.  This allows you to hopefully keep your Focus for defense if necessary.  You can also discard the upgrade on defense to reroll all of your defense dice. Note that you can’t pick and choose on defense.  It’s either all or nothing, much like old Han‘s ability.

Kylo’s recycled ability.  Sure, this was kind of a bummer, but the I Will Show You the Dark Side “IWSYTDS” condition card can be defensively used to place a Blinded Pilot crit on a ship or offensively used to place a PS0 crit on a juicy target.  Then, RAC can follow up next turn with the crit using his ability to deal it to the defender.  This ability acts as a deterrent and hopefully encourages the opponent to shoot at RAC instead, which has three times as much health but only costs 10 more points.

Systems upgrade slot.  In the latest episode of the Carolina Krayts, they astutely point out that you can basically place the ship anywhere on the mat if it has repositioning actions and Advanced Sensors. With 9PS, Kylo can dial in a conservative move, wait and see what the enemy does, and then react to it perfectly.  This is especially important when maneuvering around bombs.  The maneuverability hopefully offsets the ship’s glaring weakness: Kylo is wayyy more points than either of the other two ships (45-47 compared to 32-36).  Hold on for a moment, though.  This actually could be a good thing. It’s a small-base ship with 6 health (two to three more health than the cheaper arc-dodgers), repositioning capabilities, and a defensive special ability.  This ship can be used to preserve your Margin of Victory (“MOV”).  The plan is to destroy more points than RAC is worth (55).  In the current meta, this is probably 1-2 ships.  Then, when and if RAC goes down, Kylo can just fly around the mat at-large and engage only when you have the advantage.

That leaves us with with the unused Tech upgrade slot.  Although the list that I came up with does not utilize the TIE Silencer’s Tech slot, any of the above three upgrades are reasonable choices if you have the points to fit them.

My proposed list is far from perfect, but it’s at least one example of a potential list that makes use of the TIE Silencer’s strengths while minimizing its weaknesses.

A lot of people are disappointed about two omissions: no astromech upgrade slot and no missle upgrade slot.

We don’t know much about The Last Jedi (“TLJ”), but there does appear to be some sort of black BB droid unit: BB-9E.  Either FFG got the fluff wrong or the BB unit isn’t Kylo’s astromech sidekick afterall and just rolls around Snoke’s Supremacy much like any other droid.  I guess we will have to wait and see.  This isn’t the first time FFG has left fluff out of the game.  For example, the TIE Striker doesn’t have a bomb upgrade slot despite the fact that it has a proton bomb launcher.

Or maybe FFG was just worried about the TIE Silencer’s ability to take 4 banks into 5 dice Cruise Missiles! 😉

Stay tuned for my next article in which I combine a review of what little we know about the B/sf-17 Resistance Heavy Bomber with some wild speculation on the release date and contents of the impending FAQ.

Check out our Facebook post below for details on our latest giveaway! This time, we’re giving away a free unpainted copy of Reaper Miniature’s Elanter, the Lost Prince! See post for details.

We are partnered up with TopDeckTCG.com!  TopDeckTCG is your home for Star Wars Destiny strategy, content and singles! TopDeckTCG brings you everything that is Star Wars Destiny from great priced singles and promo cards to build your deck, competitive match play videos, deck tutorials and articles. Click Here For Singles!

← Persuasion Check: Unearthed Arcana – Eladrin and Gith
Magic: Four Reasons Why Former Players Should Come out of Retirement for an Ixalan Prerelease Event →