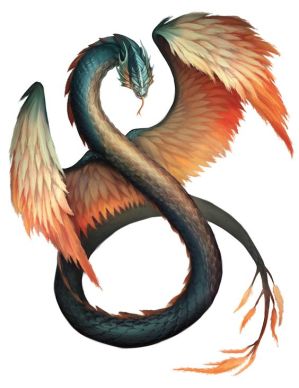 Forget about snakes on a plane, the Couatl doesn’t need a boarding pass to fly away. These airborne serpents are actually benevolent celestials who serve as caretakers of ancient and divine power or prophecy. While unable to lie, they are capable of withholding important information or answering vaguely as to allow the questioner to come to a false conclusion if it feels the need. They can also shapeshift into different humanoids and beasts and have some innate magic powers that come in handy for their guardian duties. Lastly of note, whenever a Couatl sees its own demise coming, they will reproduce and raise their young to carry on their task, showing true loyalty to their oaths.

Fast, hard to hit, and quite hearty, the Couatl seems made well for its duties as caretakers and guardians of ancient power. Add their immunities and resistances to an array of weapons and magic, and you’ve got yourself a snake that’s hard to kill. On top of that, we mentioned innate magic powers. Those manifest themselves in them being immune to scrying and mind-reading, the ability to detect thought, magic, good and evil at will, and cast a variety of healing, restorative, and protective magics multiple times a day. Add in their shapeshifting ability, and you may not even know you’re in the midst of a Couatl at all! They may appear as an older farmer, a young child, or even a cow. Their attacks, unsurprisingly, consist of constricting and biting. Constriction keeps them in place and restrained, while biting them can poison them so that they fall unconscious for a while, both of which are just as strong ways for the Couatl to non-lethally deal with misguided adventurers as they are ways to permanently end evil-doers.

I think the background of the Couatl informs a lot of great ways to use it: mostly by being a guardian. Perhaps they are an unyielding guardian of an ancient magic that, while needed for good intent by the adventurers, is not given to them under any circumstance, introducing an uneasy battle with the celestial. On the other hand, you could have some great (telepathic) roleplay where they try to bargain with such a caretaker for their need and the greater good that the treasure could put to use. Perhaps elsewhere, a Couatl could be willing ally, able to dispense information to the party as they are located in a shrine close to town. Being a powerful and long-lived being causes a lot of knowledge the come by the serpent, and if the adventurers are good of heart and intent they may be willing to share. You could further explore this angle by introducing the Couatl seeing its demise soon, and asking the party to help find a mate so that their young can take over their duties. All in all, despite being an ally most of the time, the Couatl opens up a lot of unique encounters and adventure hooks.