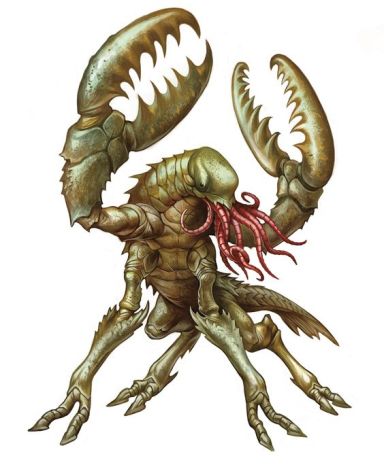 Chuuls amount to what are basically the closest thing you’re going to get to crab people in D&D. Originally created by and servants to the aboleths, they follow the ancient instructions left for them by their former masters and in the off-chance they come across a new aboleth, they will follow any instructions from that one. They were made so that they could go places that aboleths easily couldn’t, such as on land. Such orders generally included the gathering of treasures and magic items. Oh, and humanoids. The aboleths wanted to collect and control other humanoids so the Chuuls obediently would gather them for their masters. Any adventurer unlucky enough to cross one of these ancient crustacean monsters may find themselves trapped or killed at the pincers of a Chuul.

Despite their mythological origins and the fact that they maintain an ancient psychic connection to the aboleths, Chuuls really are just giant crabs when you get down to it. Their shell provides a natural armor and hardiness, making them hard for an inexperienced adventurer to bring down. Their giant pincers are deadly when combined with their immense strength, snapping and crushing bones and bodies with ease or simply grappling them with little chance of escape. They do differ from crabs in some ways, though. They can sense magic at all times- a gift bestowed by their creators to aid in the recovery of magical artifacts- and their tentacles that grow from their face have the ability to paralyze a target, making for easy capture for the unaware who get too close to a Chuul.

I think Chuuls are better heard of than seen. If you have the joy of having new players who are not privy to these giant creatures, lay the seeds of knowledge through rumor. At an early point in their adventures, bring up rumors of giant crabs roaming the shore and digging up buried treasure. Maybe a kidnapping or two, or a missing travelling merchant who left his cart behind but not a corpse or his wares. As they get stronger, bring in more details of the Chuuls and their history. Then, when they have an idea, have them encounter one. Maybe up close, maybe at a distance. But use it as a bait. Use it to lead them to great treasure (and perhaps a more formidable guardian of said treasure) or to an aboleth who would be glad to add the party to their collection. Quite frankly, you could do this with people who do know of the Chuul; just be more vague to start and keep them guessing. Maybe have them encounter a few and gain clues to the location of the lair. Beyond this, I could see a few Chuuls standing guard in such a lair, whether inhabited or not by an aboleth or other master, but as a somewhat fringe monster I wouldn’t really throw them many other places than this or a random underwater encounter.