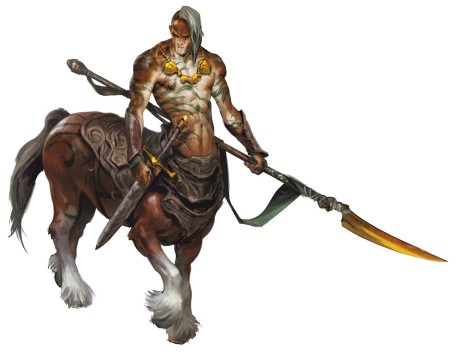 When it comes to Centaurs, we’re not horsing around (I’ll see myself out). These half-man, half-horse tribesman are nomadic in nature, and follow migration patterns that many never see come full circle as they may take multiple generations to complete.They are generally reclusive, tending to stick to their tribe and temperate areas where they can hunt and gather without the need for shelters, stopping only to trade with elves or other friendly people they meet in their travels. But because they rely on efficiency to survive, some of their ways may be seen as harsh to outsiders. For instance, a Centaur unable to keep up with the tribe during travels due to old age or injury is left behind to fend on their own. At this point either the Centaur may continue to wander on its own, likely to never been seen, or they may choose to find a small village to settle down in to live out their old age, lending their wisdom to those who welcomed them with open arms.

Some obvious benefits of having the body of a horse include being able to run fast as well as natural strength and constitution. While Centaurs tend to live unarmored they make up for it by being able to withstand whatever the wild send their way, including beasts of all sizes. And because of their builds, they can run headlong into battle, impaling enemies on a spear extra effectively when charging the enemy as well as being able to batter them with their hooves. But they’re not all muscle and melee, as they train well in the use of bows, being able to shoot at a high rate of fire with decent accuracy.

I like Centaurs because they’re generally good creatures that can be rubbed the wrong way very easily. You can use them to pose moral dilemmas as it pertains to others being in the way of their migration (such as if a village has since been built in the way) or in the instance that another seemingly good group of people have angered the Centaur with the adventurers arriving just in time to try and adjudicate. You can also look toward and old or injured Centaur for inspiration, with the adventurers coming up to them just as their tribe slips out of sight. The party could help their new acquaintance find a village to settle down in, becoming an ally full of insight and wisdom as they deal with their own quests in the surrounding area. Such an ally could definitely become your group’s favorite NPC and they’ll look forward to speaking with them every time they return to the village.