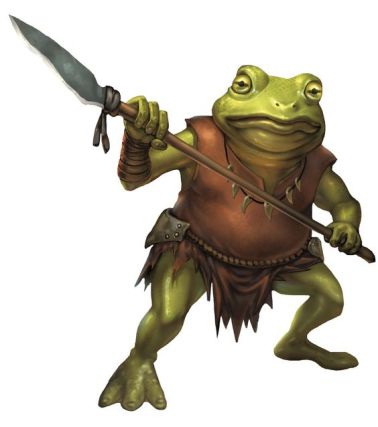 I don’t know what you’re expecting from a race of evil frog people called ‘Bullywugs’. but I can tell you that they live up to their name. Living in swamps yet putting on airs, Bullywugs like to bully one another and buy their way into having favor with their “lord” through shiny objects and magic items. But odder still is the way that they are controlled by their insecurities and the resulting ways they treat each others and outsiders; rather than outright kill intruders they prefer to capture them and force them to beg for their lives. Usually, this is successfully done through flattery and bribery as a Bullywug is deeply insecure and feeds on the feeling of outsider validation. Despite other nuances of culture, another thing worth mentioning is that a Bullywug can speak a language that sounds like frogs croaking, allowing them to converse undetected over long distances unnoticed. Interestingly, this allows them to communicate with frogs and toads of all sizes, keeping them as pets- or exceptionally large ones as mounts that can swallow intruders whole.

On the plus side, Bullywugs are not so powerful of foes. They’re slightly tougher than your run-of-the-mill bandit, but dumber and meaner as well. The only things they’ve really got going for them is their ability to breathe water and swim quickly, their swamp-based stealthing capabilities, and having a good jumping ability. Offensively Bullwugs are not much more capable either, even as they have two attacks- one with their weapon and a weaker one with a bite. Really, the only other thing they can do that sets them apart from anyone else is their ability to talk with frogs and toads, meaning you may find yourself up against a giant version of one, which would be troubling.

A more seasoned group of adventurers isn’t likely to find Bullywugs a particularly dangerous foe, no more than they would find bandits or highwaymen a challenge. Newer adventurers, however, have some good options here for interactions. Bullywugs provide a great opportunity to do the ‘whole group is captured and imprisoned’ story, except you don’t need to justify it like you would if they were caught by a more civilized force. Once they’re captured, roleplaying out the scene where they are brought before the lord to beg and barter could be great fun, and could lead to them promising to get some baubles for the Bullywugs. Or maybe they promise to rid a troublesome hag from the swamp for their freedom, or at the very least steal some of her treasure. On the other hand, if the players are travelling with a NPC, having only the NPC eaten by a giant frog and brought back without the adventurers gives a great reason to follow and intrude, trying to break their companion out of imprisonment either stealthily or by brute force.