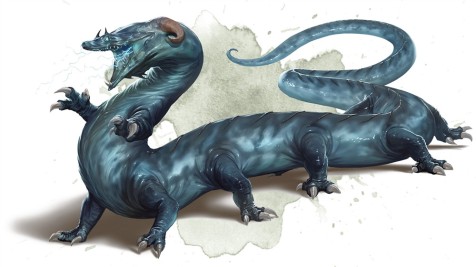 Snakes are scary. Big snakes are scarier. Huge snakes with 12 legs that can breath lightning, can swallow you whole, and go head to head with dragons trying to settle near their lair are terrifying. That’s why I tend to shy away from pestering any Behirs I meet. Not to mention their intelligence- while not as critical thinking as your average adventurer, they know enough to speak draconic and converse with their prey, likely intimidating them. They were originally created by giants to fight against the dragons, and they keep their purpose with them to this day, fighting over territory- namely in mountains and cliffside caverns.

The only thing that might be to the detriment of the Behir is that they don’t have wings, as they excel is just about everything else. Good armor, more hit points than you can shake a stick at (even a pointy stick), and the abilities of lightning breath and swallowing enemies whole. Even if you have a high amount of hit points yourself, you’re not going to be able to beat the Behir through hamfisted tactics- swinging a sword? It’s going to climb up a wall and shoot lightning at you. Casting a lot of spells? It’s going to come close and swallow you. And these things are fast- when they’re not climbing they pull all twelve of their legs up and slither like a lightning fast snake, which is frightening in and of itself. So if you find yourself face to face with a Behir, spread out, stay mobile, and get creative with that offense, because its smart enough to think outside the box itself.

I like the idea of a Behir in my game because while it does have intelligence, the fact it is huge truly makes it a monster worth fearing. It errs on the side of evil and will likely act on impulse, but as they say- the enemy of my enemy is my friend. A Behir desperate enough to rid its territory of a dragon may even be willing to work with a party- the party should just make sure to watch their back at all times. In a more traditional sense, a Behir may claim a dragon’s lair for their own, taking control of any servants of the dragon such as goblins and kobolds and guarding that treasure. When it comes to finding how to add one into your game, think of how you would add a dragon. Then, take away some of the dragon’s smarts, replace it’s wings with 8 more legs, and give it a cool lair in a mountain.