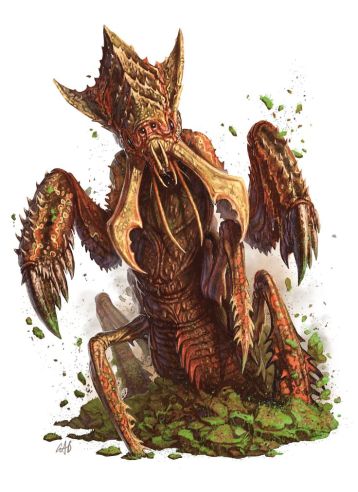 What looks like a giant bug and can snap you in half? Why, it’s the Ankheg! These awesome and horrifying monsters resemble huge insects and possess very strong mandibles, and while their large size and strength allow them to easily bite and grapple enemies, it’s their acid spray that can pose a real problem to fledgling adventurers. But crushing adventurers aside, the Ankheg also uses its mandibles to burrow through the earth, leaving behind partial tunnels that could be explored by those daring or foolish enough to do so.

While still a relatively low level monster, the Ankheg could easily be fatal against a few starting adventurers. It’s lacking in defensive prowess and speed but makes up for it in some very damaging attacks. When it takes a bite it also grapples its target, keeping them locked in and likely to go down fast from both slashing and acid damage. On the other hand, it has a rechargeable acid spray that promises to deliver half damage on a save, meaning your wizard could be going down without much of a fight. Keeping the bug at bay appears to be the safest option, as does spreading out so that it has to pick and choose who to shoot acid at rather than hitting everyone in a line.

Know what gets an adventurer drooling? The hint of treasure in a dangerous place. Have your players find a few coins outside of a tunnel and watch them try whatever they can to get inside and find more. Maybe this could lead to the den where the Ankheg lays its eggs, leaves behind the remains (and treasures) of its victims, or stores them for later. A classic ‘Timmy fell down the Ankheg tunnel’ quest turn this into a rescue victim that could require stealthing and more than just fighting, possibly finding others or items of importance. On the surface, perhaps being asked to deter the Ankheg from surfacing in a certain area, be it farmland, forest, or elsewhere, could pose and interesting challenge where the aim isn’t to slay, but rather drive off. Whatever you decide, be sure to have the Ankheg burst out of the ground behind them, right where the wizard is standing!